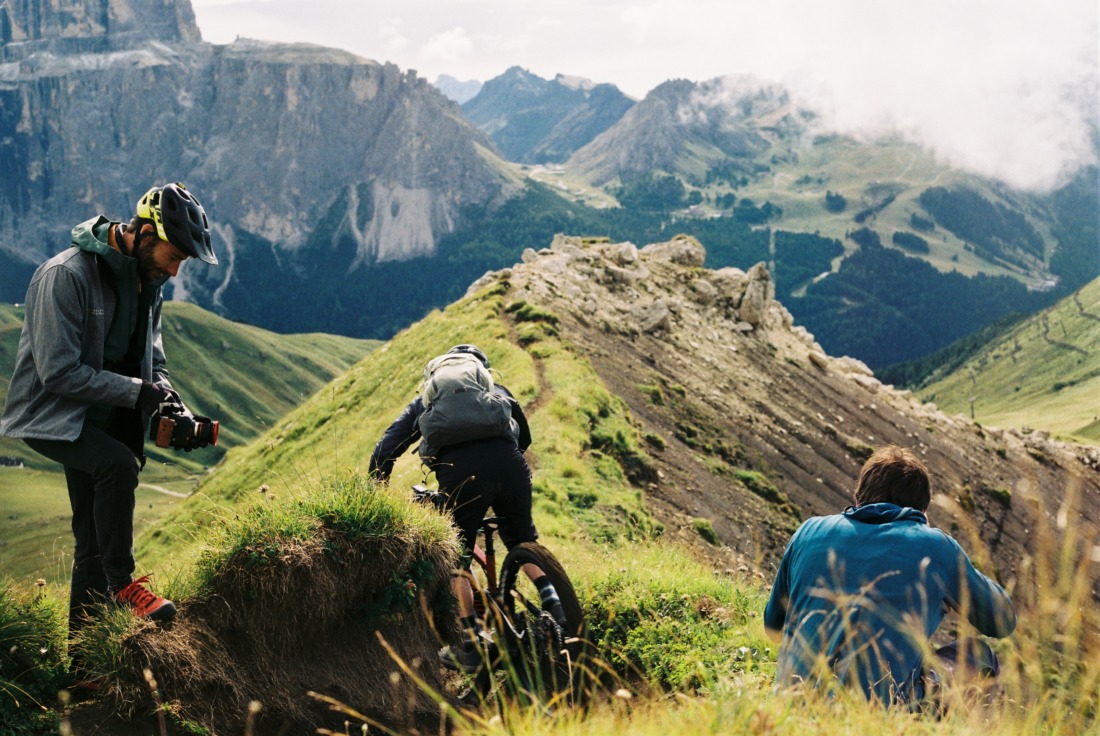 Behind the scenes of a photoshoot in the Dolomites

I don’t know about you but often when we look at social media and magazines, we tend to only see magnificent photos and most of the time we forget what’s gone into place to achieve this.

In this article, I’m going to take you behind the scenes of my last Moustache shoot in the Dolomites for the launch of the GAME 2022.

Before putting out a video, there is a long preparation and planning phase. First one must find a good idea and come up with the story to transcribe as best as possible the soul of the bike. Once the concept has been defined, we tirelessly search for the best spot, crossing our fingers that the weather will play ball and that there won’t be any unforeseen mishaps on the day itself…

On site, the serious work starts! Nothing can be left to chance because each detail has its importance and the risk is having to pass hours of time on retouches, or even worse, not being able to use an image because of an out of place grimace or dust on the lens… A shoot is hours of filming and photography, often with numerous retakes for the riders, whilst always keeping smiling (Andreas is very good at that :D). In short, there’s always a little stress and fatigue but the end result makes it all worthwhile.

If you don’t know the GAME, it’s the most hard-hitting Moustache MTB with 170mm of travel, this bike is conceived for the toughest trails. This year it gets a new 750 Wh battery that adds 20% more autonomy. All that’s needed to get even more riding fun! The idea is therefore to show the bike’s potential, which can take you to the summit of any mountain, to ride until nightfall without having to stop (to recharge the bike’s battery in any case). 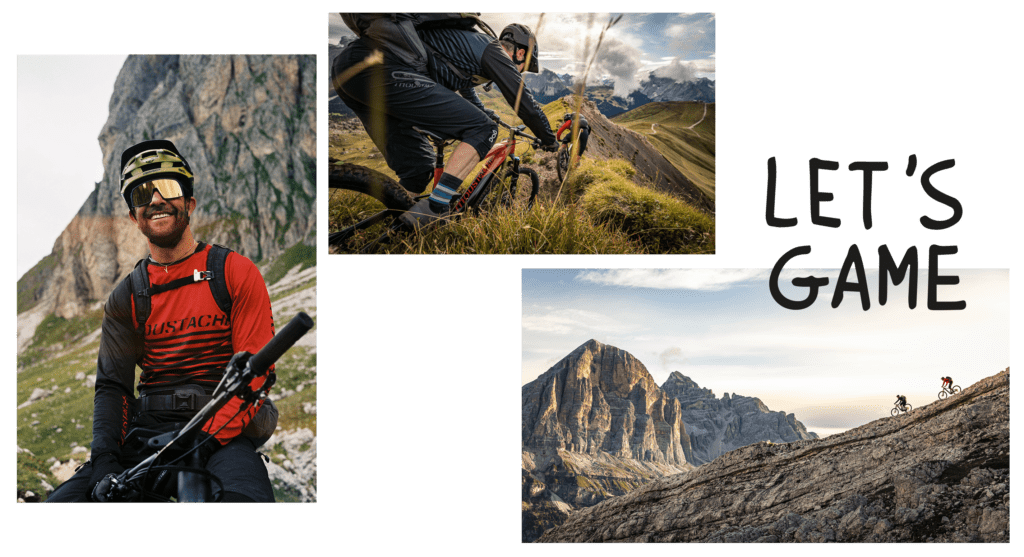 For the first time since the very start of Moustache, we wanted to head outside of France for a shoot. No, we’re not bored of our favorite terrain in the Vosges, but opening up to new horizons can do us good after these periods of confinement. Amongst the destinations of which we thought are the mythical Dolomites.

Who is better placed for advising us on this than Andreas Tonelli and Werner Ebner, both of whom are Moustache ambassadors and mountain guides. They know this region like the back of their hands!

Several emails and video conferences later, the trip is planned and the list of spots to shoot is ready, perfetto.

Let’s go! It’s time to leave for five busy days!
Friday morning at 6am the van is loaded with all the material, and I hit the road in the direction of Neuligen (GE) to pick-up Manuel Sulzer our photographer and join the rest of the group at our basecamp in Val Gardena (Italy). Mathieu Echeverri aka GenepiFilm, our cameraman, makes his own way from Nice (France), whilst Andréas and Werner will come direct from their homes tomorrow morning. It’s a fair bit of logistics to sort but we’re nowhere near a Hollywood shoot, in general for this type of project we work in a small team as we get about mostly on bikes and so we must all know how to ride. After a good Italian pizza it’s time to head to bed, the serious work starts tomorrow. 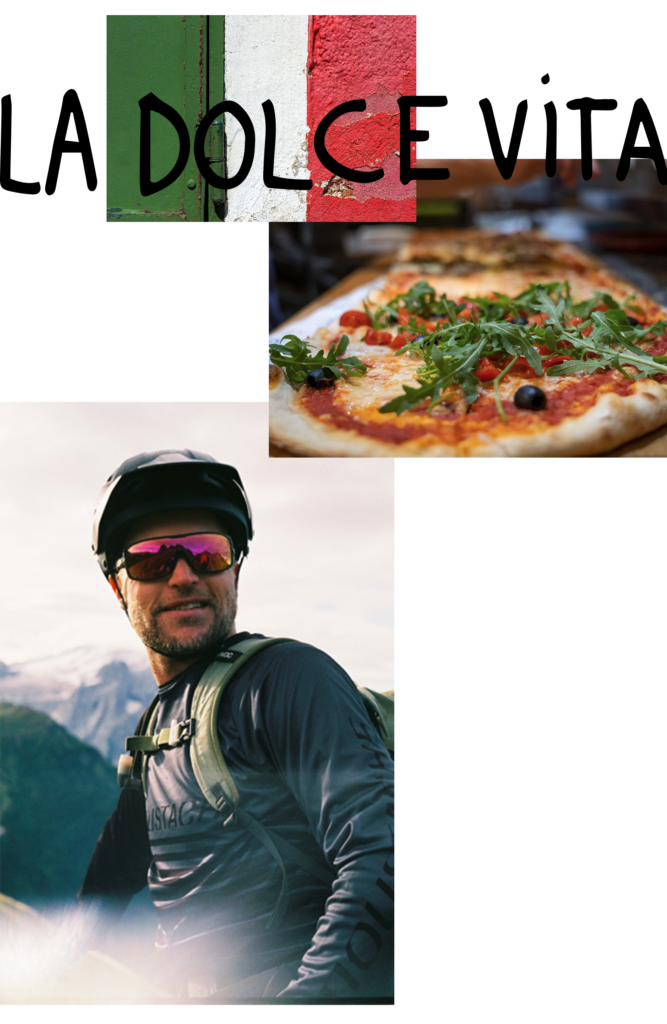 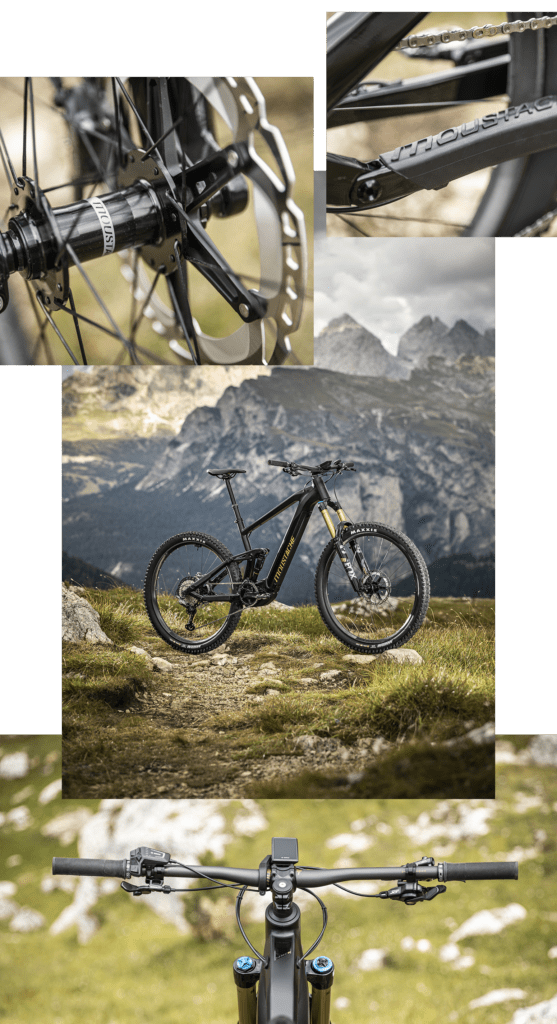 Andréas and Werner join the team for breakfast. On the day’s plan: still shots of the 5 bikes with the fabulous Dolomites in the background.
On paper, it’s not the most complicated part and yet it can easily take hours just to find a flat place (it’s easier in the Netherlands…). We are not going to lie, spending a good part of the day on static photos is not the most exciting part of a shoot, let’s get straight to the riding part! 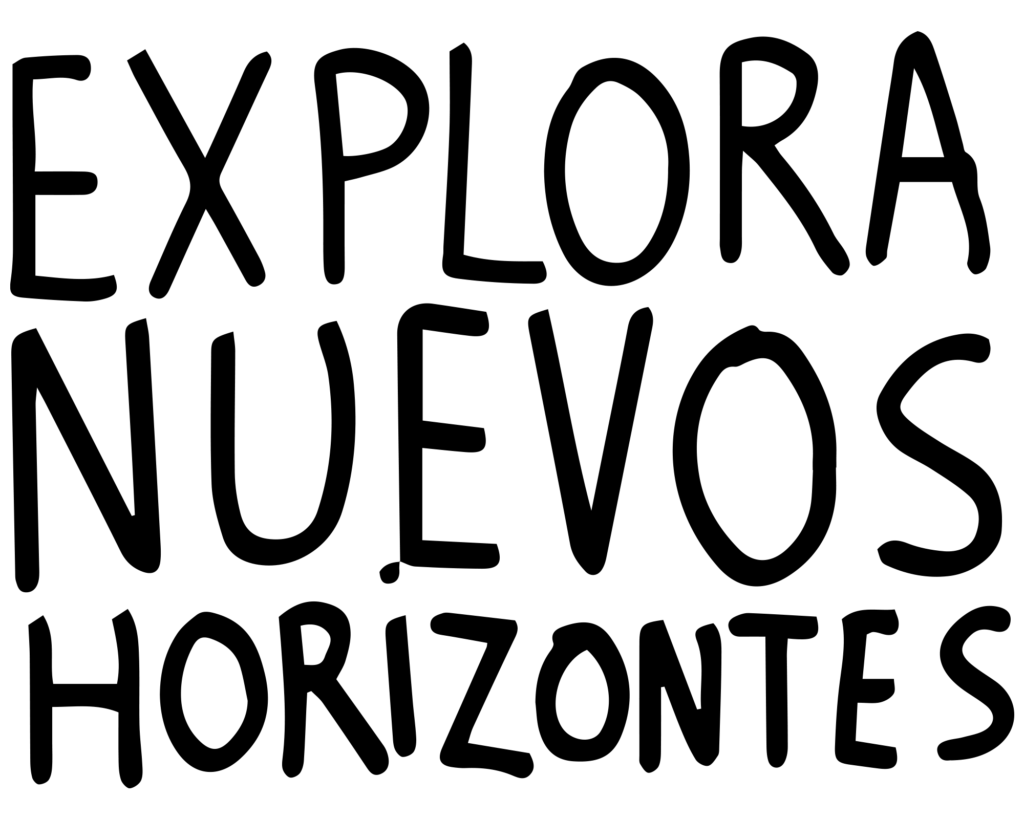 The group arranged to meet at 5am at the carpark to get a bus to reach a spot at the top of the mountain and capture sunrise. Our driver dropped us off at the start of the trails, we finished the climb on bikes which helped us warm up a little as the temperature was below freezing and there was an icy wind. At 6.30 the sun peeked out. We took a few images on the ridge, taking advantage of the light and the panorama showing below us, the type of view which makes it worth getting out of bed, even very early!

Next we tackle a little singletrack that descends into the pastures, on which we film technical sections. Our two locals have quickly taken in hand the new bikes and are sending it in the  rocks. That day we hit spot after spot, until we arrive at a refuge that’s come straight from the cover of an outdoor travel magazine! We stop at the little chalet for a few minutes to refuel and drink the traditional cappuccino before heading back out to ride until mid-afternoon.

This evening, the team had planned to sleep in a refuge at 2575 m altitude, suffice to say it’s best not to be a sleepwalker… The plan is to arrive up there for nightfall in order to shoot night images and be up in time for sunrise! The day is going to be long but we can’t wait to arrive at the next destination as the place described by Andréas and Werner seems simply magic. We ride all morning with the guys, until we’re interrupted by a huge storm.

At the end of the afternoon the ultimate reward can be spotted from afar, perched high on the top of the mountain. The blanket of fog pierced by rays of sunlight lets us catch a glimpse of the valley which stretches out below our feet/wheels. A little detail, the evening meal in the refuge is served at a fixed time so if we don’t want to eat cold leftovers, we mustn’t make the chef wait… With the guys, we decide to shoot some images between the main course and the dessert as the sunset won’t wait either. As night falls, we finally eat our portion of strudel which is part of the region’s unmissable delicacies. This cinnamon flavour patisserie with chopped apples and dried fruits, is part of our Austrian neighbor’s heritage. The double culture is very present in the Dolomites which even belonged to Austria until 1919… that’s it for the history for now, just a little cultural digression. We get back to our dormitory which reminds me of youth hostels! Here’s hoping that no one in the team snores too loudly…

This morning the group wakes up early again hoping to catch sun rise, but luck is not on our side, the sky is cloudy… Nevermind, the view is still breathtaking at the edge of the cliff, we decide to shoot some drone images to capture this extraordinary panorama and then descend on the trail. The idea is to ride as much as possible before 11am because with the lifts being open, the trails are then besieged by hikers. After a quick detour via the incredible Cinque Torre, we reach the base of the resort from which we left the day before.

We already have quite a lot of images riding technical rocky trails, ideally, I would have liked to film a more flowy trail to have a different environment.  Andréas and Werner therefore decide to head to a new spot less popular with hikers, with smooth dirt trails, bingo! We get on the road to Cortina D’Ampezzo and head out to discover these new routes. On these flowy trails, the guys have fun and let off the brakes completely. Everyone is stoked because even if we are there for work, our profession certainly has some good points… 🙂

The afternoon coming to its end, it’s time to get back to Val Gardena for our last evening in Italy. There’s no going crazy as we have 10 hours of driving the next day to get back to our offices… We are shattered but the job is done, and it was pretty cool.

On the return, Manuel and I check out some of the photos from the shoot and we are both sure of one thing: it was definitely worth it! These first photos are cracking and really make you want to ride. We hope that it’s the same for you… ;-{D