The birth of the projectD-DayOn the road again!The debriefAll you need to know about this Tour du Mont BlancChoosing the bikesThe movie "Le Mont Blanc Express" presented at the "TOUS EN SELLE" festival

Every crazy project comes from an idea that is most of the time a bit crazy too. 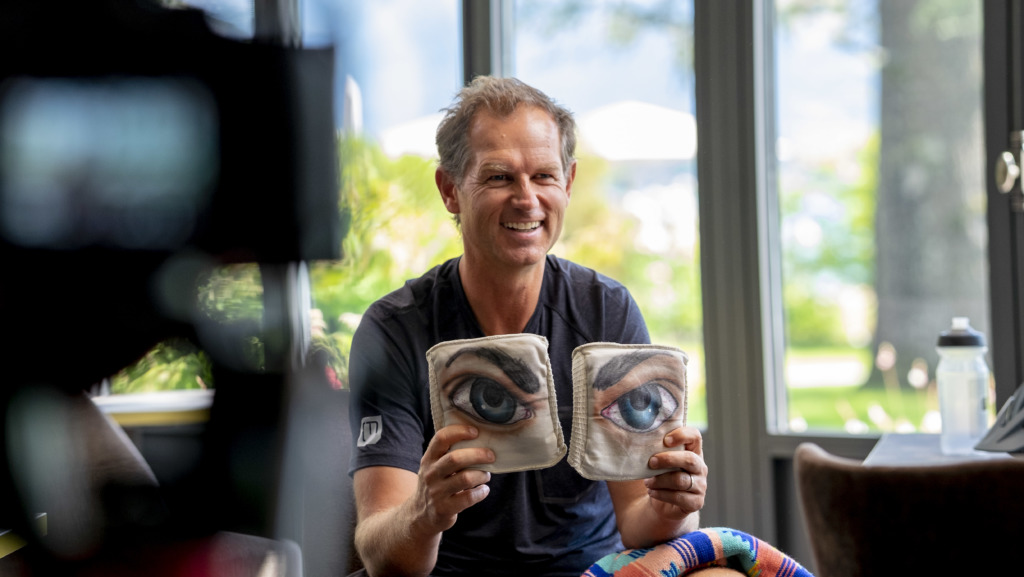 The Tour du Mont Blanc in one day is the idea of our ambassador and friend, Edgar Grospiron. As a true ebike enthusiast, this former ski Champion regularly leaves his car in the garage to ride his bike instead. In his mind, ebikes are the best transportation there is and the most fun!

After several long distance rides achieved alone with his Moustache bike, this rider from the Haute-Savoie in France said to himself that for his next Tour du Mont Blanc, it would be nice to share this adventure with other passionate riders. No sooner said than done, Edgar called another fervent fan of ebikes, Greg Sand, co-founder of Moustache. Immediately thrilled by this challenge, he decided to take Manu Antonot, his business partner and other founder of the brand, along on their adventure. 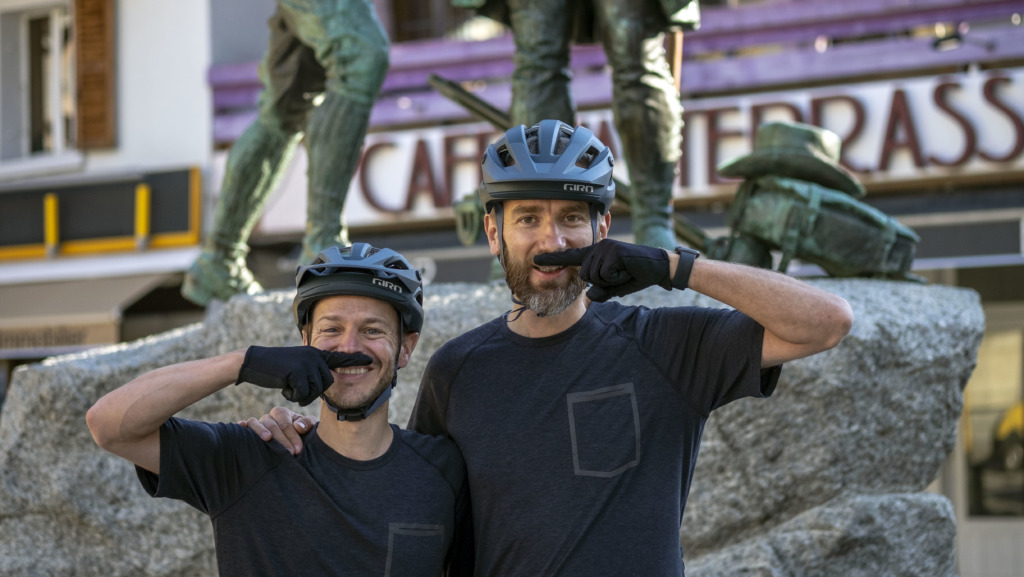 “With the very particular context of this year, the preparation for this Tour du Mont Blanc has been quite short and in the end, this is what made the adventure even more interesting.

After the lockdown in France, I had to set the alarm a bit earlier in the weekend to leave when the sun was just rising. Longer rides were important to get used to the feeling of being in the saddle, I knew that spending hours on the bike would be tough so I had to get ready! We turned our classic training rides into real adventures, it is amazing all you can explore pedaling for 12 hours.” – Greg

The departure was set on June 26th at sunrise, from the mythical Place Balmat in Chamonix (French Alpes) and the return expected at the same place by the end of the day. The route tackled 320km and 8500m of elevation around Mont Blanc, passing through Megève before tackling the Cormet de Roselend, then continuing on to La Rosière with the ascent of the col du Petit Saint-Bernard, before switching to the Italian side in the Aosta valley, then crossing the Swiss border again via the col du Grand Saint-Bernard, and finally coming back to France after the last climb over col de la Forclaz. In a nutshell, enough to fill our day! ;-{D “It is a really symbolic project because the passion and the convictions that bring us together today in this adventure, are exactly the same ones that gave birth to Moustache almost 10 years ago” – Manu 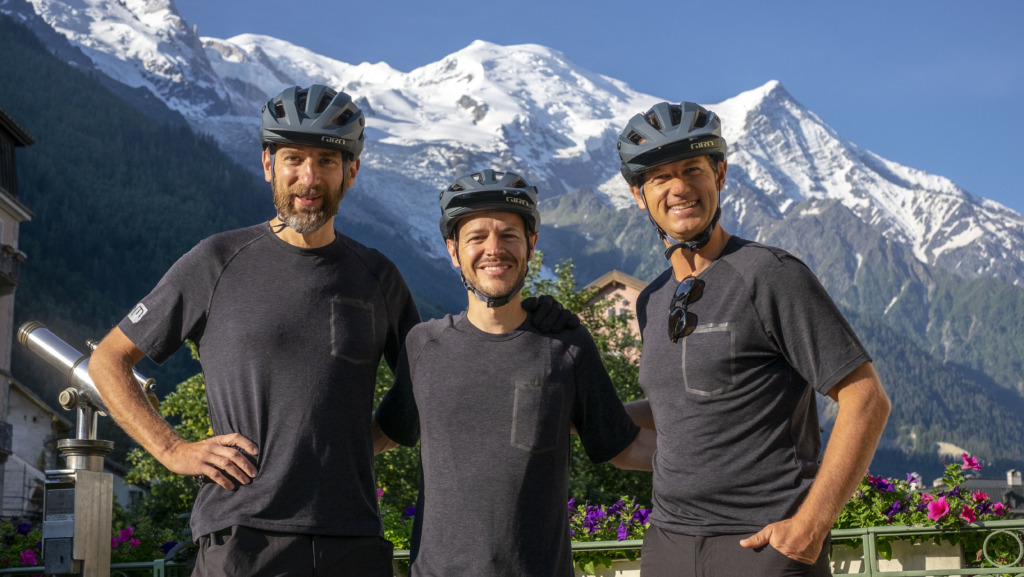 Because of the excitement, the night was short for the 3 mates, especially as the alarm clock rang early that morning. But they were all in a good mood! Behind Manu’s joking around that morning, there was probably some apprehension with his little inner voice asking “Manu, are you going to make it through those 300km?“.
Now that we’re here, there’s no going back option and abandoning will not be allowed (anyway, with all the photo equipment and the three photographers/cameramen, the support van is completely full!). 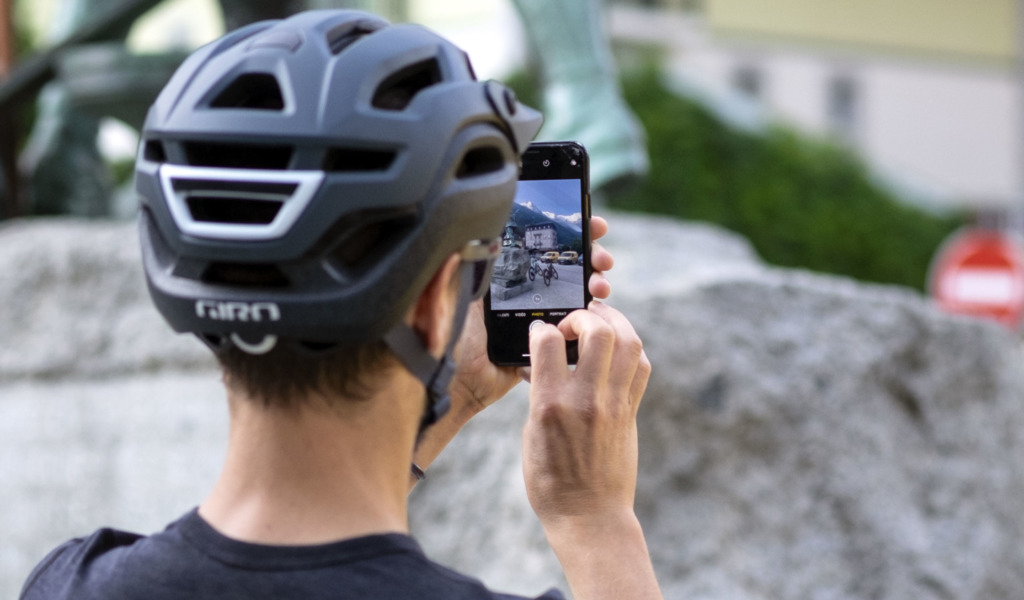 Last photos to capture the departure with a magnificent sunrise revealing Mont Blanc’s snowy peaks. The Postal vehicles start to invade the square for their daily mail run… It’s time to leave!

Short sleeves and Moustache in the wind, the day promises to be hot. Hydration will be all the more important! After the first kilometers done at full speed, the small group arrives in the middle of the morning on the first climb of the day: the mythical Cormet de Roselend! Ahead of them, about 20 kilometers climbing before reaching the summit. After the first 12 km, the winding road leads to the lake at the Roselend Dam. A short break is needed to enjoy the view and let everybody take a breath! Our group stops in a small hostel on the roadside and after some chit-chat at the bar around a fresh coke, Greg and Manu take the opportunity to stretch while the local star (Mr. Grospiron) signs an autograph. Once the break is over, everyone gets back in their saddle to complete the ascent of the pass which culminates at 1968m, before crossing to the other side in the direction of Italy. 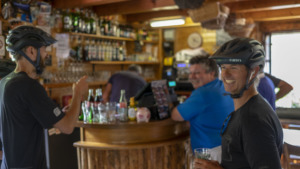 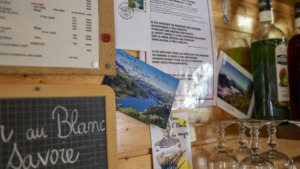 Once back down from the Cormet de Roselend, our trio attacks the Petit Saint-Bernard pass that links the Tarentaise valley (from Séez and Bourg-Saint-Maurice in France) to the Aosta valley (Thuile valley in Italy). They are facing a 28km climb with an average gradient of 4%. The road is in excellent condition and quite busy in the summer period. Pedaling at a fast pace, the group tackle bend after bend and the few cyclists seen on the climb are quickly distanced by the Speed bikes. With an average speed of 31km/h, even Julian Alaphilippe or Tadej Pogačar would have a hard time staying on their wheels! 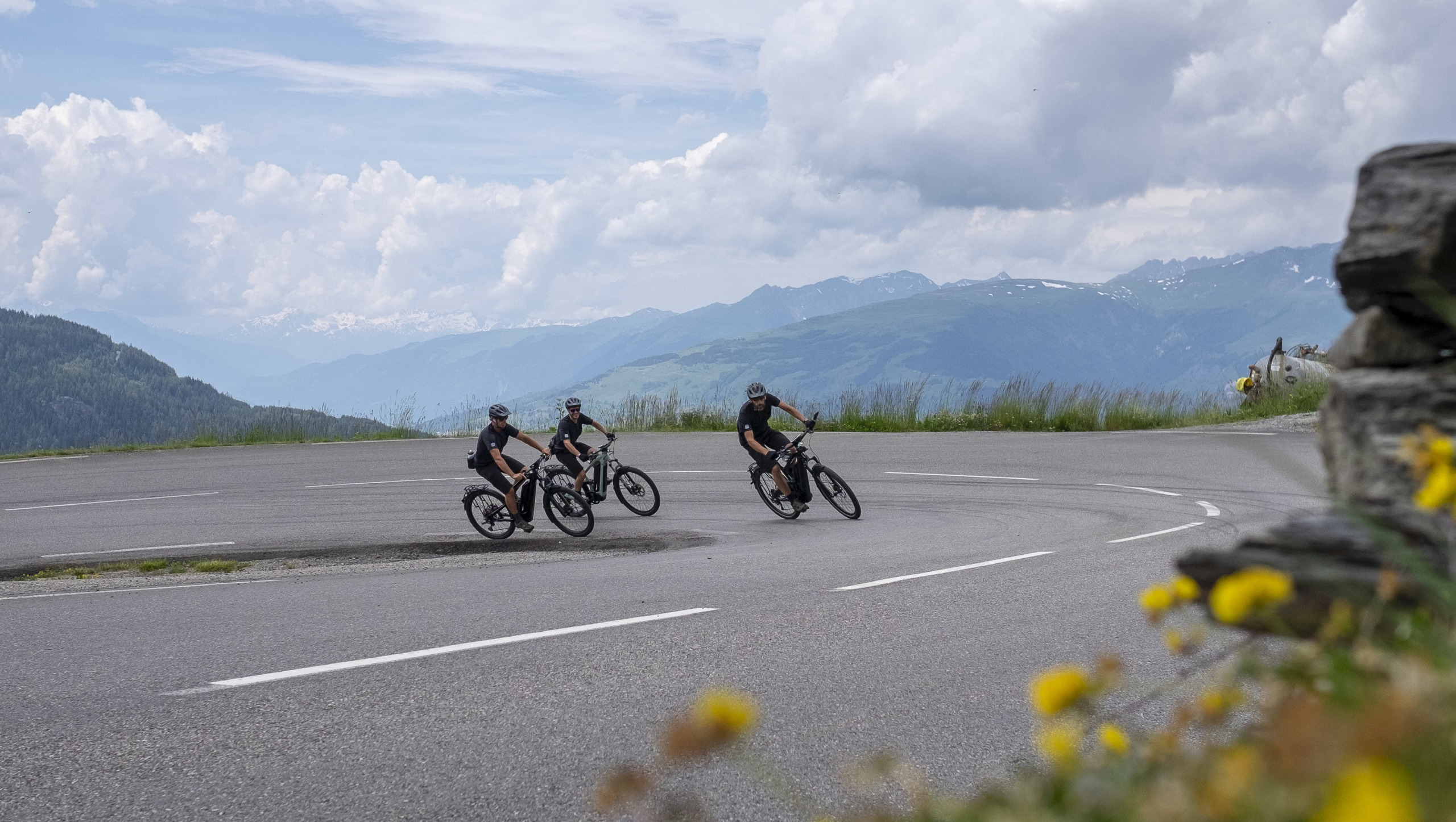 When reaching the top, the 360° view is incredible and crossing the Italian border is symbolic. At 2188m you can still see traces of snow, which give a totally different atmosphere from the Cormet pass. 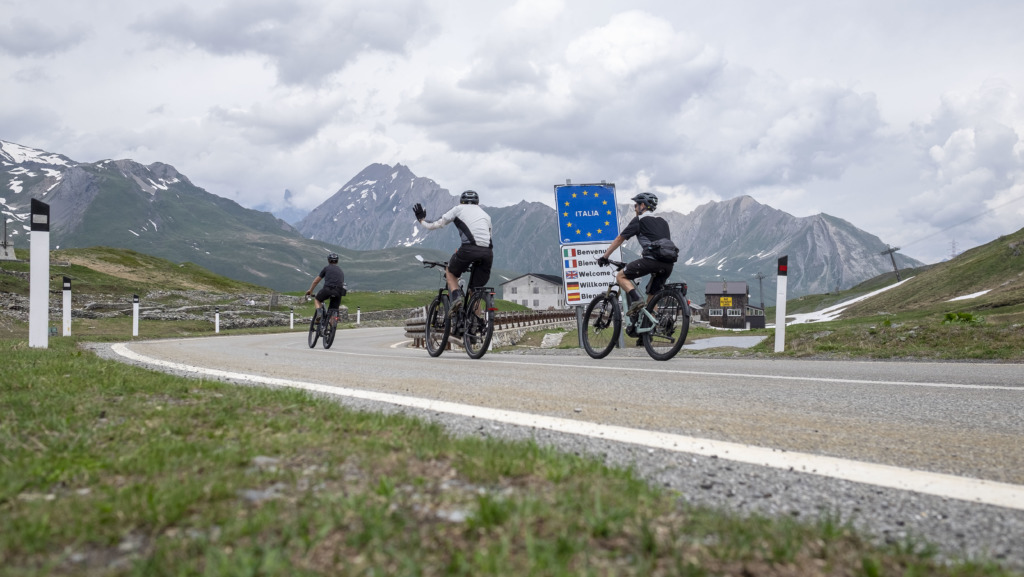 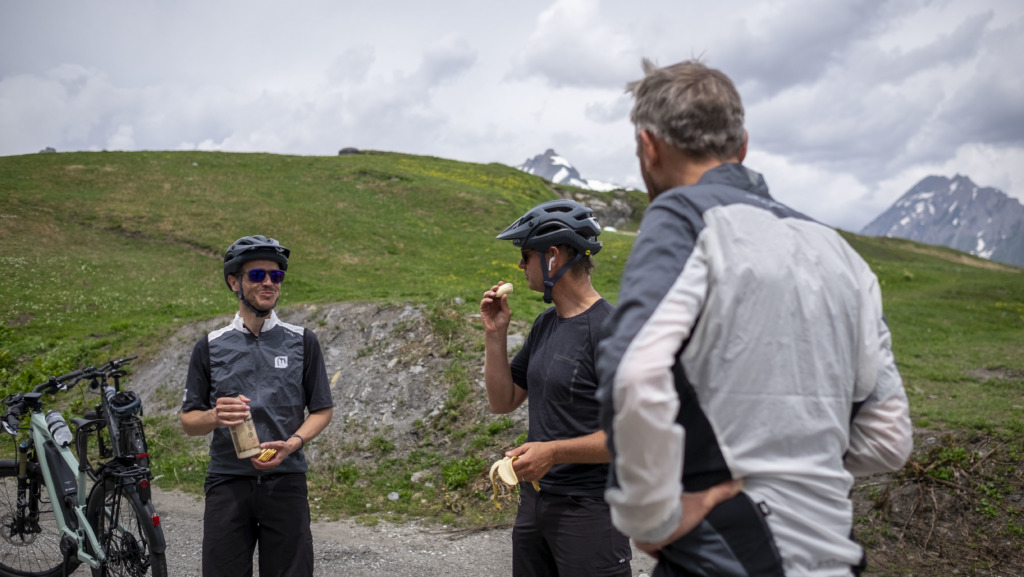 The sky is getting cloudy and the thermometer has considerably dropped since they left the valley.
A short break to recharge the batteries of the riders (and those of the bikes), put on the Giro windbreaker and it’s time to go downhill!

Almost 200km has already been ridden when approaching the city of Aosta, the wind has risen in the valley and the legs start to feel heavier… Edgar and Greg take turns to pull the group on the national road, whereas Manu has to show mental strength to stay on their wheels and tell his burning legs to shut up. The taller you are, the more resistance you have to the wind!
A quick stop to change the batteries again and a quick refuel before starting the ascent of the Grand Saint-Bernard. 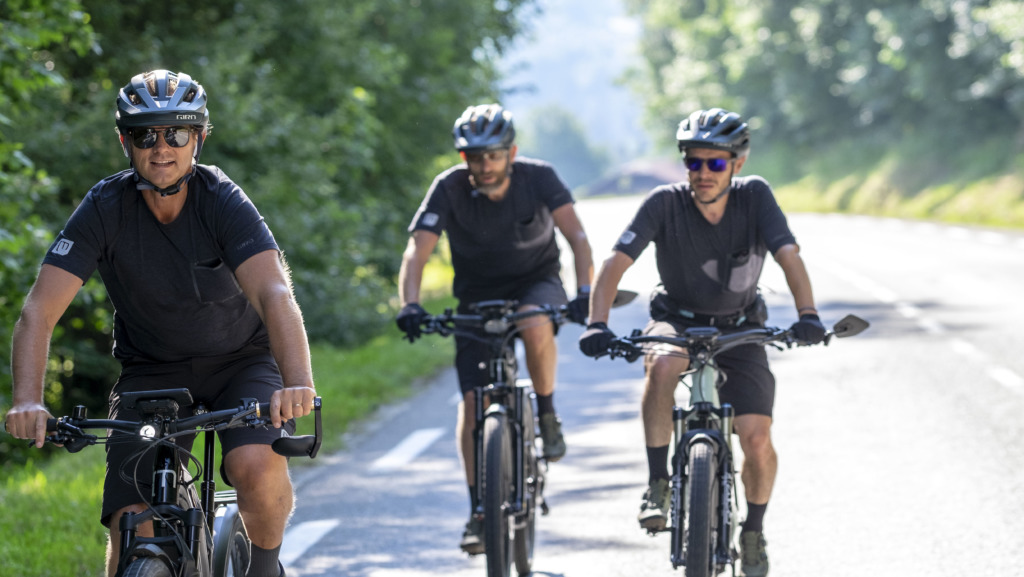 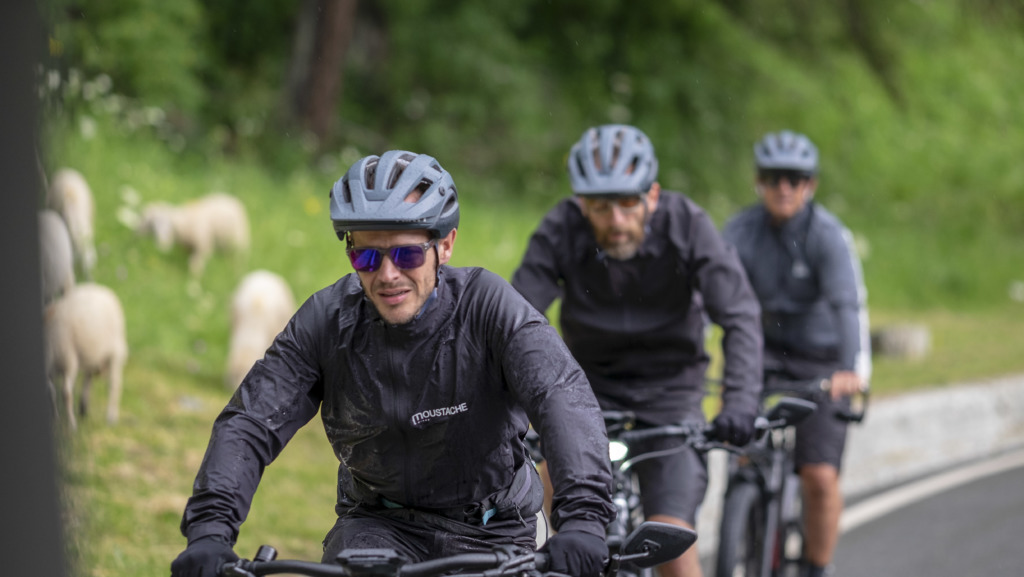 As they approach the col, the sky becomes threatening and the further they go, the closer they get to the storm that awaits their passage. The rain is starting to fall on the guys, but in the end it will only be a short shower, just enough to make them take the rain jackets out and to cool down the road.

This pass is the longest and most difficult of the ride. In order to reach the summit at 2469m high, you have to overcome an average slope of almost 6% over 32km. One bend after another, the temperature drops as you climb and the scenery changes. This ascent is spectacular, the surrounding landscape is breathtaking, so much so that everyone forgets about the physical effort for a second. During the last few kilometres, the greenery gives way to rocky peaks where the road makes its way to the Swiss border. 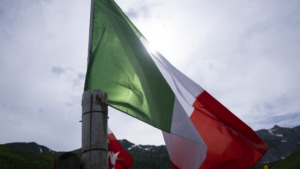 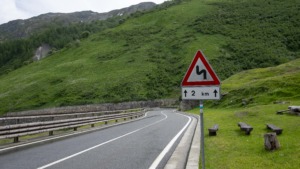 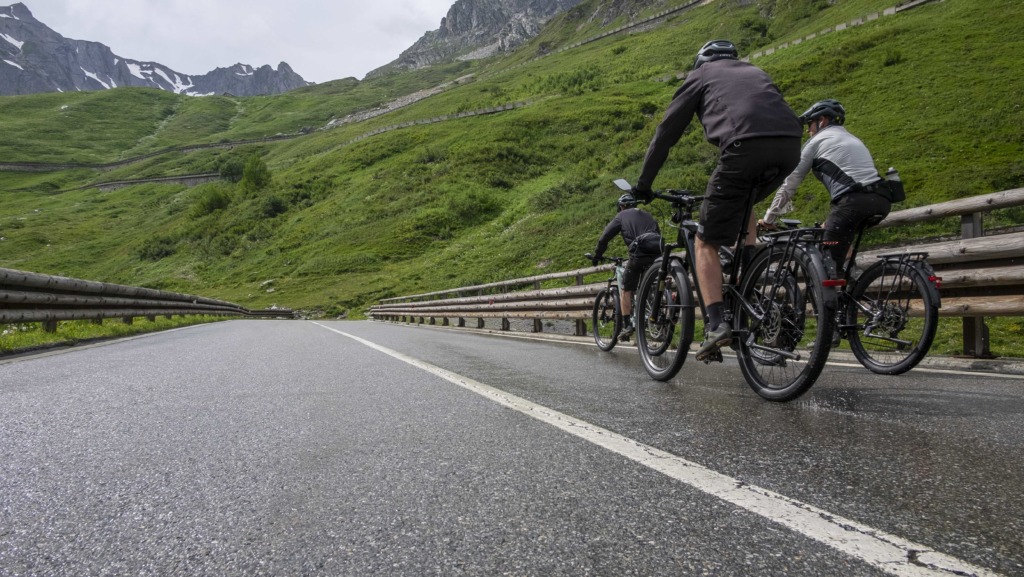 More than 230km have been done, they’re in the last 100 ones! After a last well-deserved break at the Italian-Swiss border, and a last change of batteries, a long descent awaits Edgar, Manu and Greg to reach Martigny (Switzerland) where one more pass remains to be crossed before getting back on the French roads. 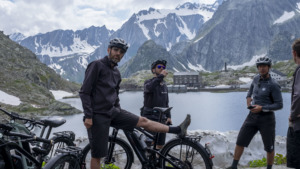 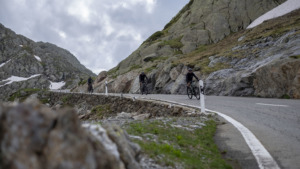 In the late afternoon the group arrives at the bottom of the Col de la Forclaz, which starts rolling through the vineyards before meandering for a few kilometres through the forest to reach the top. 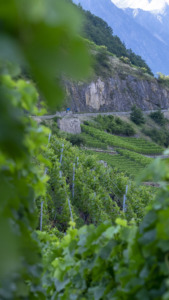 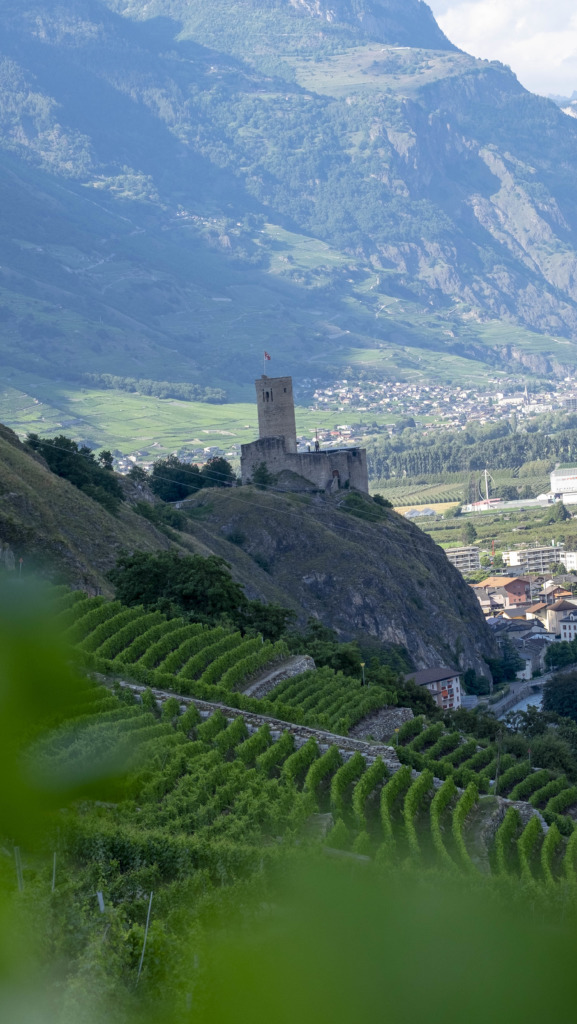 Keeping up with the pace, they follow on to the Col des Montets, which does not present any major difficulty with a maximum altidude of 1461m. The view is no less bucolic with the snow-covered alpine peaks above their heads. Only a few more kilometres with a nice sunset, and the trio is closer than ever to their goal. Everyone is grinning from ear to ear, they are about to reach Chamonix to complete this challenge. This deserves striking the symbolic Moustache-pose! 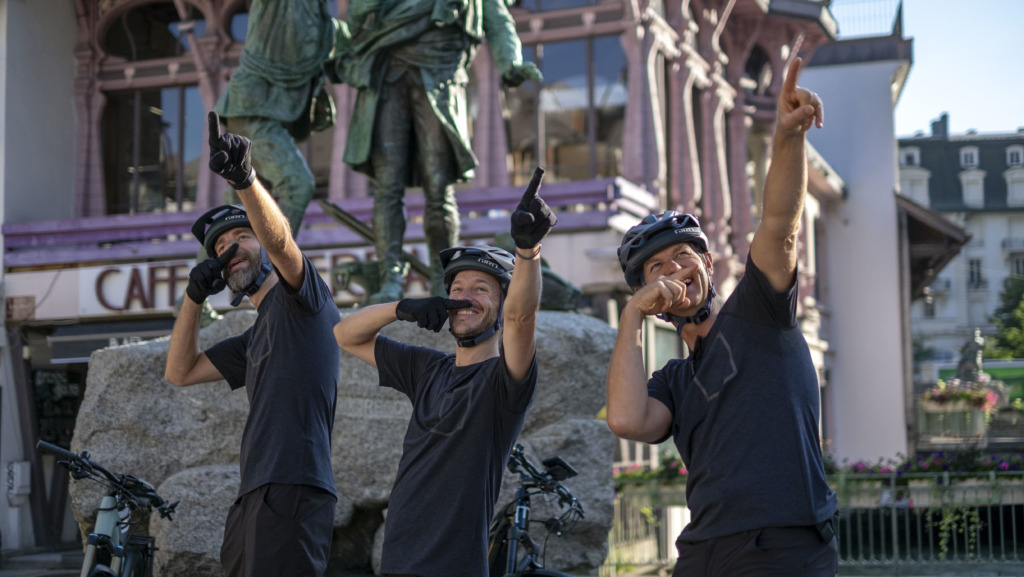 What a great adventure to manage to complete the Tour du Mont Blanc in one day (on Speed bikes!)
;-{D

This unique experience for simple amateur riders like us, allowed our group to discover splendid places and made us think a lot, not only while we were riding but also before and after it.
During the training rides, we discovered new and unexpected places close to where we live (in the Vosges) and what we did by bike we had never even taken the time to do by car! What’s more, nothing beats the freedom of being on a bike when visiting new places…

Pushing the concept of cycling mobility to its limits allows us to take a step back and consider changes that will truly impact on our daily lives. When we realise that we can cover several hundred kilometres by bike in one day, we validate the fact that cycling can become a real alternative to the car.
Manu and Greg have always been convinced that ebikes open up the field of possibilities, which is also why the brand Moustache was born. After these 320km completed, it is clear that there is still a way longer path to be covered and many more adventures to be shared by bike, electric or not of course!

At the end of this adventure, all you want to do is to do it all over again! 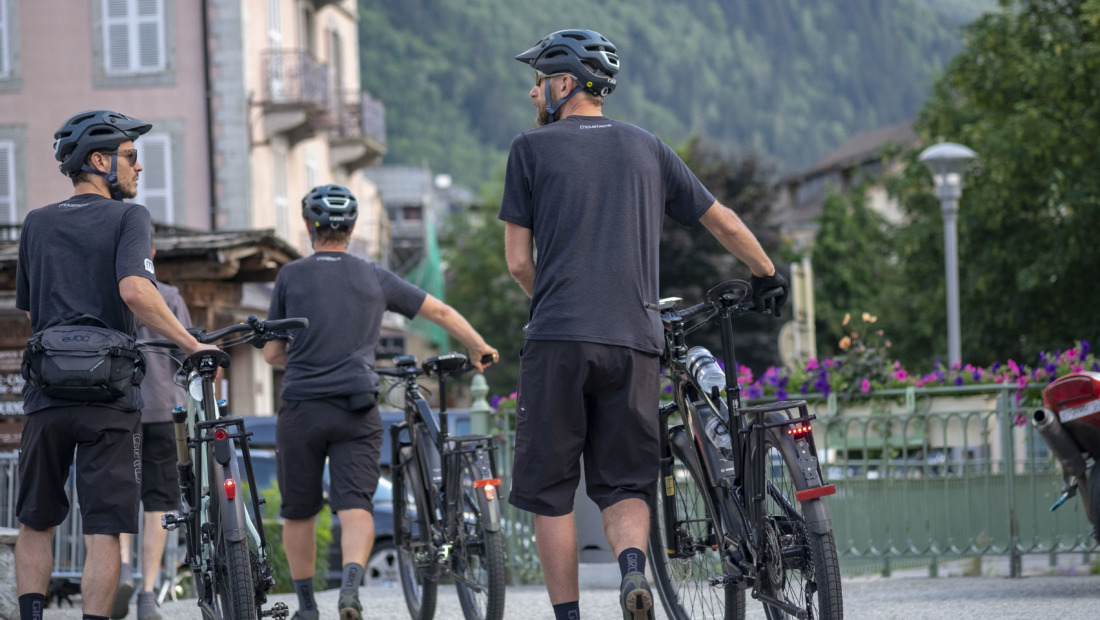 Your turn to go on Tour!

Even without being cycling champions and without having the fitness of a pro-rider, the Tour du Mont Blanc with an ebike is really accessible to everybody.

Recharge your batteries, whether riding an ebike or not.

For this Tour du Mont Blanc, the objective was to finish it in just one day, which required a little bit of logistic support in order to refuel and to be able to change batteries on the route.

Lots of fun on the road!

Depending on the type of bike you ride, it is absolutely possible to do this in a weekend or a little longer if you want to make more stops and enjoy the scenery. The places to visit and the local gastronomy are clearly worth it!

“Beyond the physical preparation itself, nutrition and hydration are also key and you should not neglect them in order to serenely approach long distances.” – Greg

We chose a Speed Bike model with a double battery (1125Wh of autonomy): the Friday 27 FS Speed Dual.

After 9h38 of pedaling at an average speed of 34km/h (a feat worthy of the Tour de France riders!) Edgar, Greg and Manu have used a total of 7 batteries each to get over the 323km and 8 164m of elevation gain of the route.

You can find the GPS track of the course below and the video teaser of this unforgettable day.

Download the GPX track of the course
Partager sur