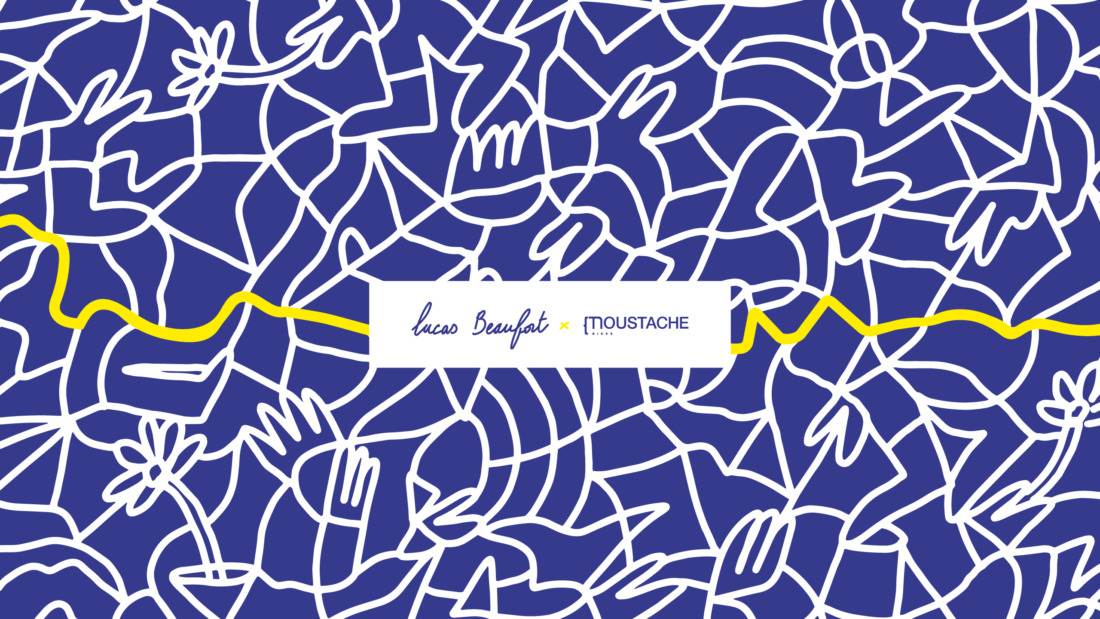 The idea of the Petit Tour de France was born in spring 2020.
When you are used to changing countries every week, two months of lockdown increased tenfold my desire to sail off into the sunset.
As it’s difficult to plan for the future, exploring France was the best option. 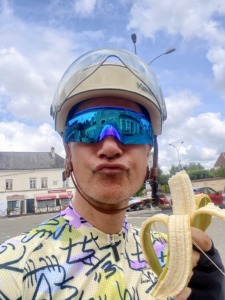 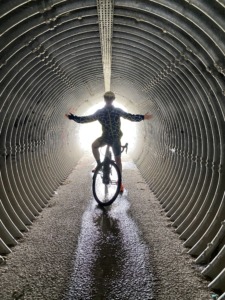 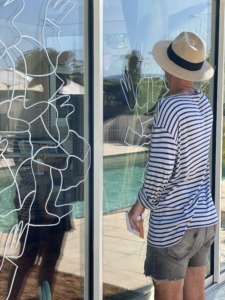 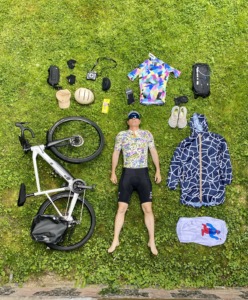 Early July 2021 and one year of preparation later, I found myself ready for an extraordinary adventure: crossing France on a Moustache e-bike with two of my best friends.
20 days and 1461 km separated Normandy, where I currently live, and the Côte d’Azur, where I’m from.
The start was planned for the 10th of July 2021. Two days before, my team arrived in order to put into place the last details.
There was a joyful mood despite the persistent gloomy weather.

It’s raining cats and dogs, and we are cold to our bones. My wife Garance is also ready to leave with a ton of luggage crammed into the sweeper car. At this precise moment, I’ve no idea what will be waiting for us, but the desire to take off gets the upper hand and nothing can stop us.
The first stage is memorable as it’s the longest of the tour. The 85 km initially planned are transformed into 105 km. When you are not physically prepared, when rain and wind join
the party and you puncture after 10km, you say to yourself that it couldn’t be worse. After 60 km, I already had difficulty sitting on the saddle, without taking into account that I had relied a little too much on the electrical assistance of the bike which severely compromised the success of this 1st stage to Bellême. I still remember our exhausted arrival after almost 5h15 of pedalling, it was epic, as if we had arrived at the end of the tour when it was actually just the start.
The first week is made tougher by a few punctures and above all, by weather, you wouldn’t want to put a dog out in. It rained all week almost without stopping. Apart from the weather, I would have never imagined I’d enjoy riding a bike so much. This feeling each morning of heading out to discover France, travelling along the Loire river, little villages filled me
with pleasure.
We spent the 14th of July national holiday in a charming village at Ousson-sur-Loire. I’ve got incredible memories as it was the village fête just like we had when I was little, old-fashioned, with games like the greasy pole and the egg and spoon race. I saw happy people sharing a simple time together, it’s what I was looking for. The sun eventually re-appeared for the 2nd week from Lyon. I really had the feeling that I’d done two tours of France, firstly the grey and cold, then with the sun beating down on us until Cannes. 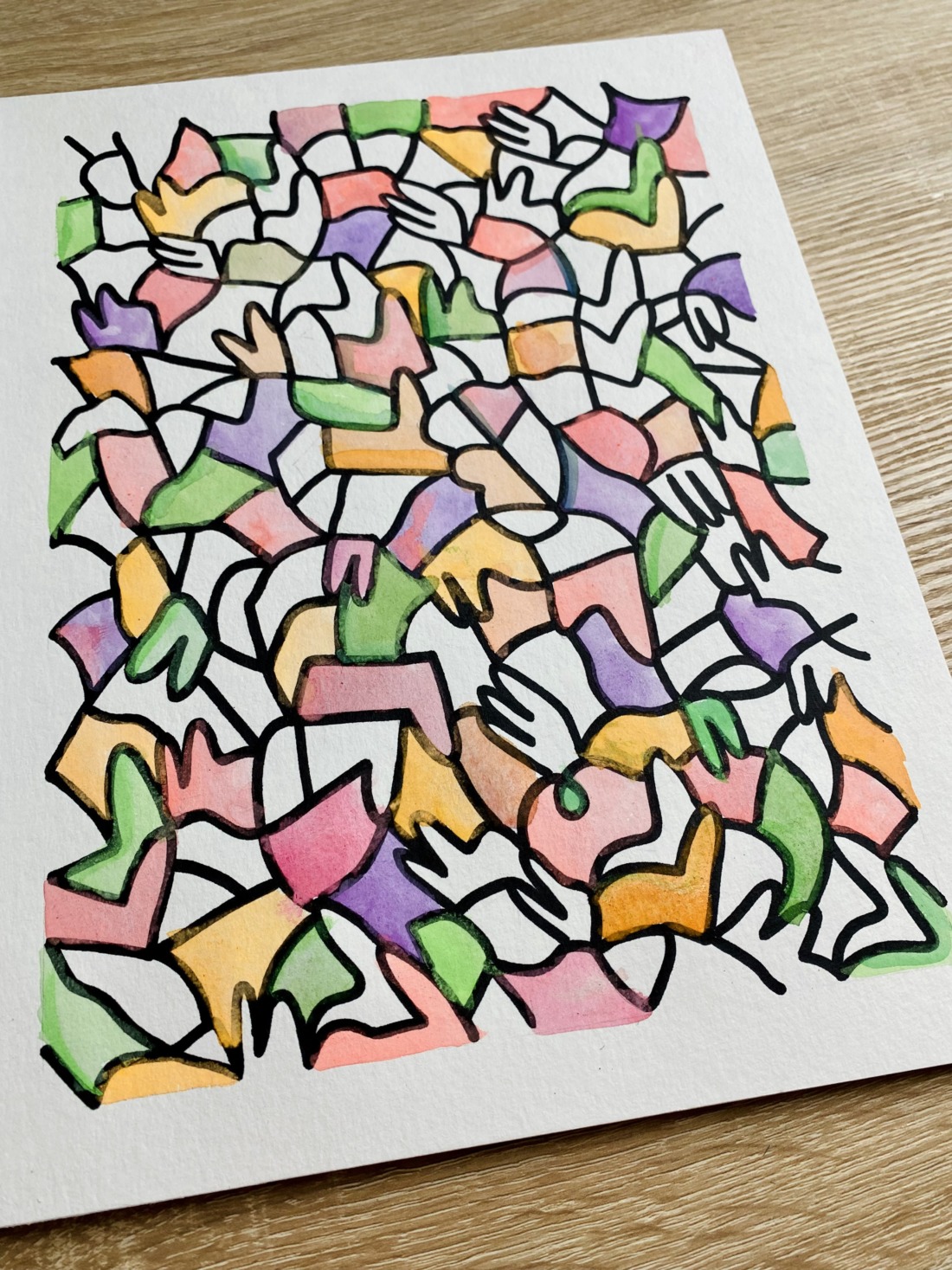 Every evening we stayed in chambres d’hôtes that we had carefully selected for their location but above all for their capacity to inspire me. That was really part of the journey, the idea to submerge ourselves in a new environment to be recreated each afternoon. What a great surprise when the owners of the place suggested we could eat with them in the evening. It was what we wanted, to know more about the territory, meet people, share our memories, our trials, talk about our adventure.
The two evenings that stay with me the most were those at Chomerac and Tarascon. I feel like the people that we met became much more than simple acquaintances, we have planned to see each other again and collaborate on cultural projects in the future. The arrival at Cannes, where I was born and grew up had a particularly special taste for me. It was the chance to see friends again, to get back into the local skate scene, and above all, to celebrate the end of the tour at my mum’s!
My greatest adventure of the tour was without doubt the friendship that grew day after day with my two partners on the road, my friends Zians and Valentin, who carried me right to the end. You should have seen us sing, shout and cry on the route. When your GPS makes you take impossible roads through the rocks, when you puncture, again and again, 5 minutes
after repairing your inner tube. This feeling you can recount to others, but living it over 1461 km, almost 24 hours a day for 20 days, it’s almost indescribable.

Why did you choose an electric bike for this trip?

I had a serious injury on my ankle in December 2020 which compromised my training before the start of the Little Tour de France. I think the choice of an electric bike was a sensible one because 1461 km was no mean feat, even on electric. We suffered physically and the assistance on the big cols quite honestly saved the day.

What stays with you from this experience?

What I remember above all is the pleasure from a refound freedom, this freedom that corresponds with my life as an artist. Leaving for Australia on a whim, waking up in a different place every morning, discovering, exploring, sharing, and living. I’ve had the chance to travel throughout the world several times, but this Little Tour de France is already part of the most incredible adventures I’ve had the luck to experience.

What would you advise to people who would like to try this kind of adventure on a bike?

To live their dream. Since I turned 30 years old I repeat to myself every day that it’s not the time that passes, it’s us that pass. What’s the use in waiting to live one’s dreams. I hear so often people around me saying « one day I’ll leave to do a tour of the world » or « one day I’ll do that ». For me, it’s as if they said «I’ll never do that ». I’m an optimistic person and I say to myself that if I can live out my dreams, why not others?

Your opinion on getting about/travelling by bike?

Travelling on a bike, it’s without any doubt the most fun way of exploring and discovering the world. I want to have even bigger adventures, a tour of Europe and meet artists on the way… that’s arousing my curiosity for 2022.
Partager sur