Saison 9 - Moustache Bikes
Back to the site
Home > Saison 9

Think outside the frame ...
Saison 9

... going beyond the limits, pushing the boundaries, imagining and realizing the impossible is what the entire Moustache team has been striving to do since the beginning and this new season is once again illustrating this aspect.

All the tubes that form the structure of a bicycle.

Think outside the frame:

Go outside the anticipated limits.

This word that’s so often used both literally and figuratively represents the full Moustache history!
The frame, to which we give our full attention, this key link between all the parts; just like the sauce on any good dish, it’s this that creates our emotions and sometimes the magic!
It demands so much work from us, so much thought, so much questioning. It makes us juggle with millimeters, with degrees, each being so important to the final result.
Developing a new frame requires an enormous commitment. This year, we’ve developed no less than 10 new models!!!

A colossal amount of work which started 2 years ago. 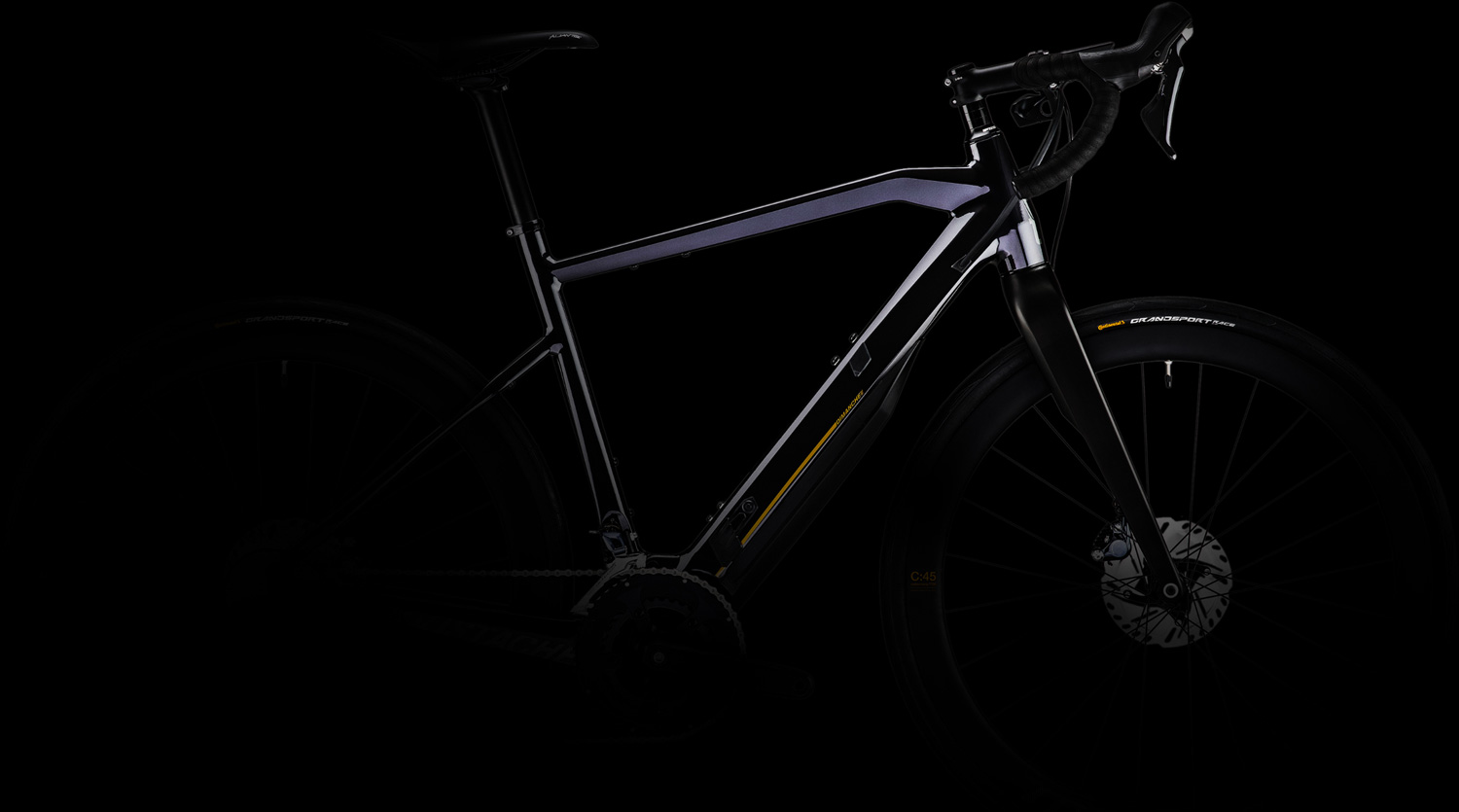 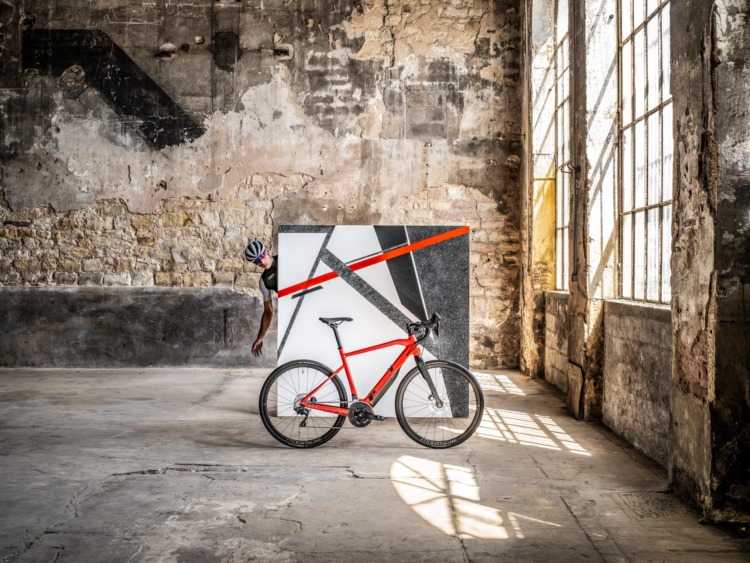 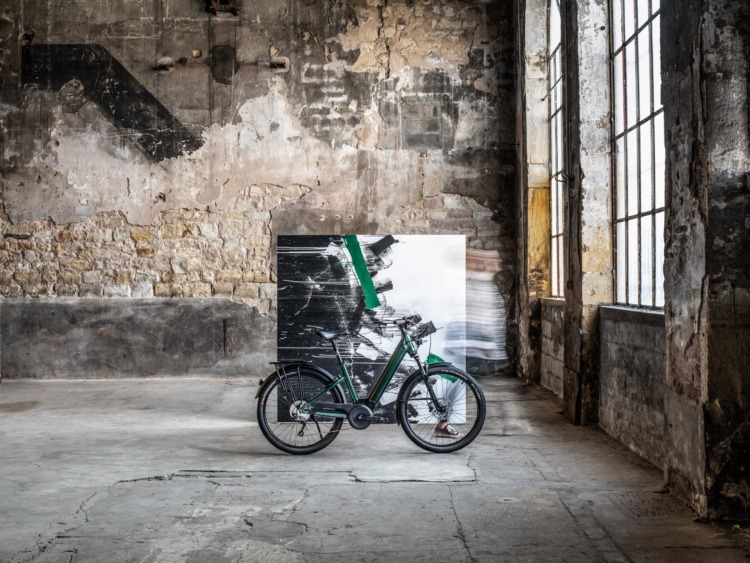 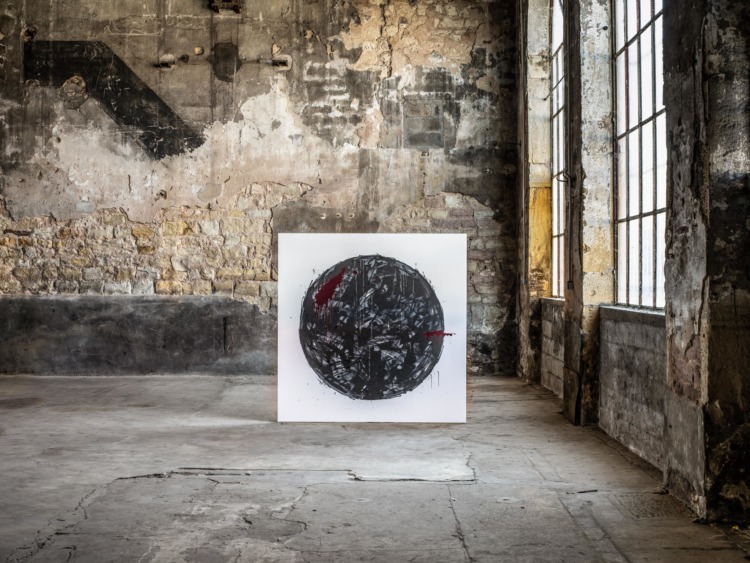 Everything starts with an idea, with a desire, with a drawing, and it’s at this moment that we try to think outside the frame, to think of the new types of usage that are made possible by the electrification of bikes.

What better example to illustrate this than the Dimanche 28, our new road bike. When we started Moustache 7 years ago, we were already outside the frame and sometimes considered as enlightened when we stated that all categories of bikes would become electric… but that is now the reality!

For this new model, we have done nothing in the same way as others. We have yet again created our own recipes based on our experience and the km accumulated by the whole team!

We wanted a bike without limits, capable of eating up many km and cols, a bike that’s just as dynamic as a traditional road bike. A bike that’s capable of going past 25 km/h without difficulty, without any noise. A reliable product, that’s high performance in the long term. For us, it was never a question of using a micromotor and a mini battery to simply satisfy the argument of look and weight… weight is so relative on an electric bike. Oh yes, those several kg more on the scale, are those that help you to propel forward, and make you feel so light and efficient once in the saddle… That changes the paradigm!

Thinking outside the frame, it’s what’s possible with the Dimanche 28! Whether you’re a committed cyclist or a beginner, a new horizon is opened for you, a new playground.

It’s probably because we have the luck to live in the heart of a fantastic playground, the Vosges, that we have developed such a bike!

Thinking outside the frame, it’s what has brought you each of the 65 models in the range. What greater pleasure than to leave behind the car when in town, to eat up the km out riding alone, with friends or as a family, on the road, or forest trails. What greater pleasure than to string together climbs and descents on E-MTB or even take on the new formats of electric bike races and take home the national Champions jersey on your shoulders like Jérôme Gilloux for France in the saddle of his Moustache a few months ago!

So you too, move to electric and think outside the frame!!! 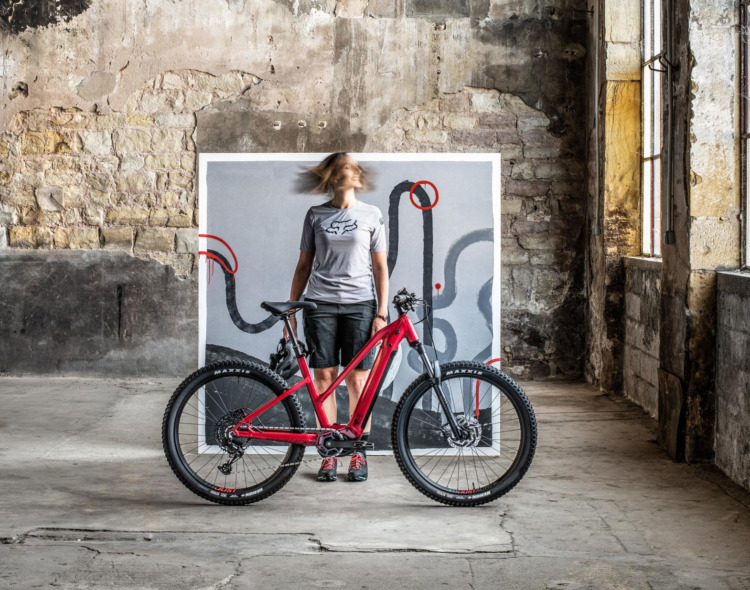 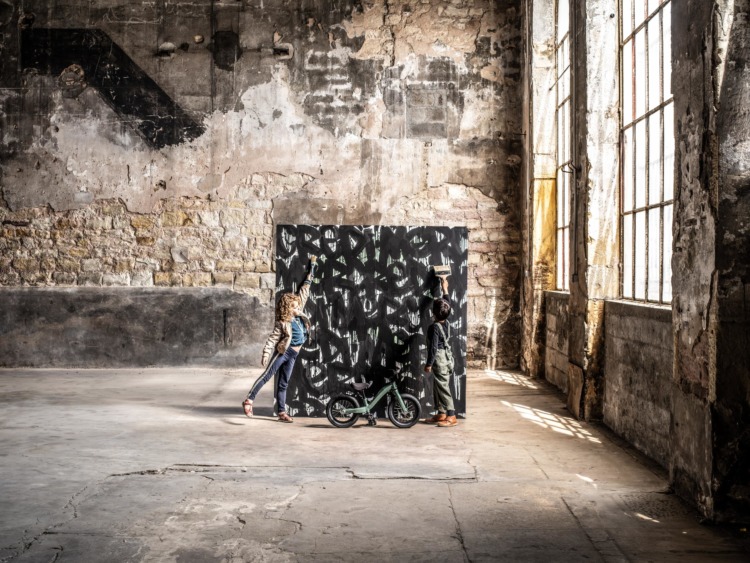 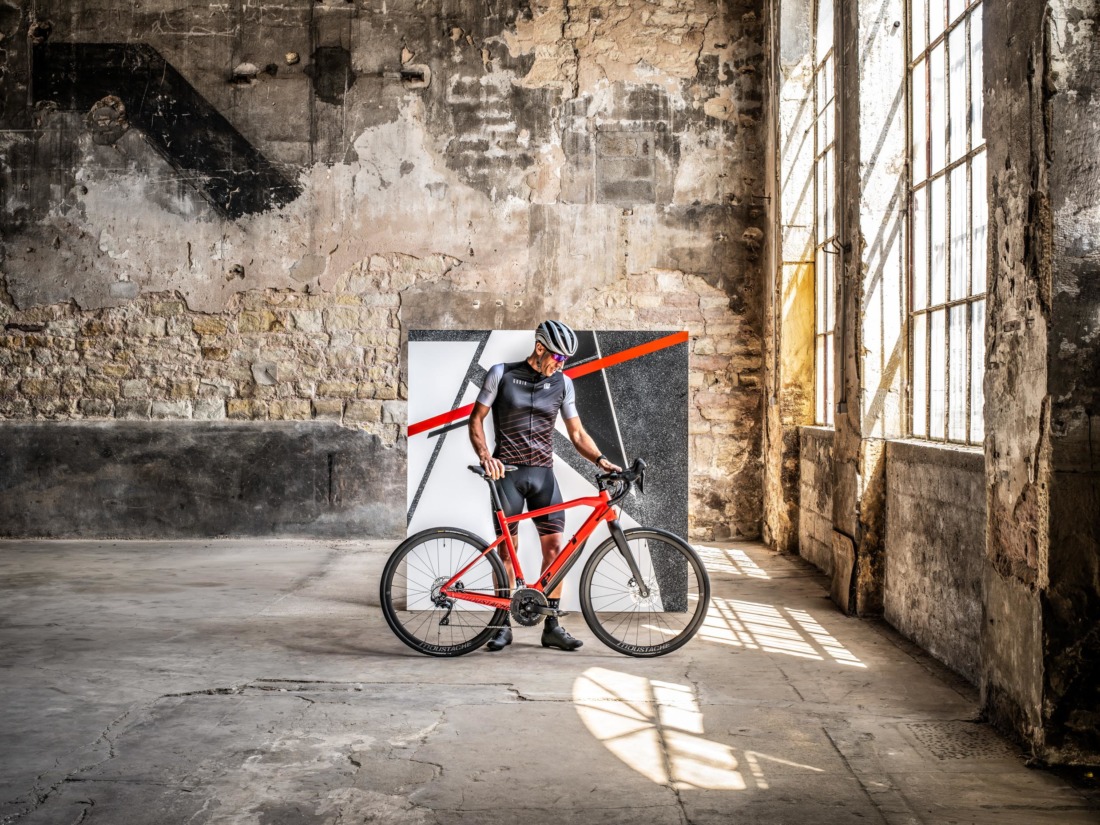 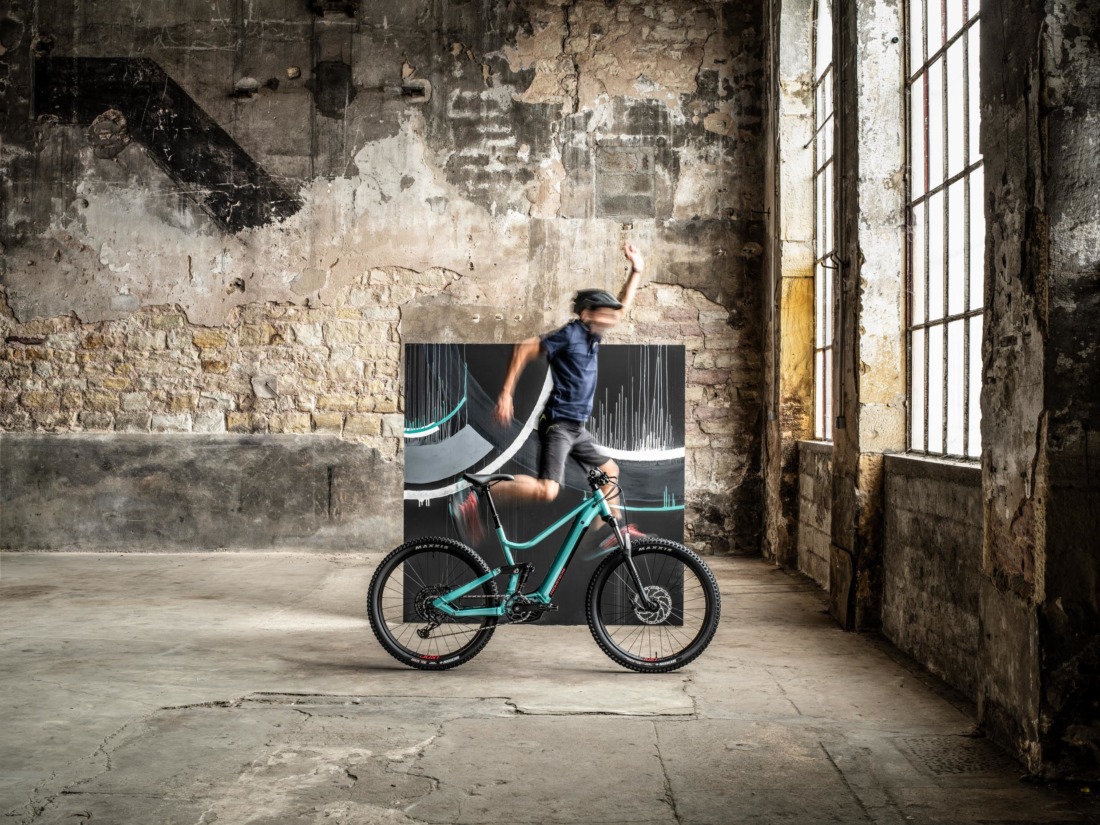 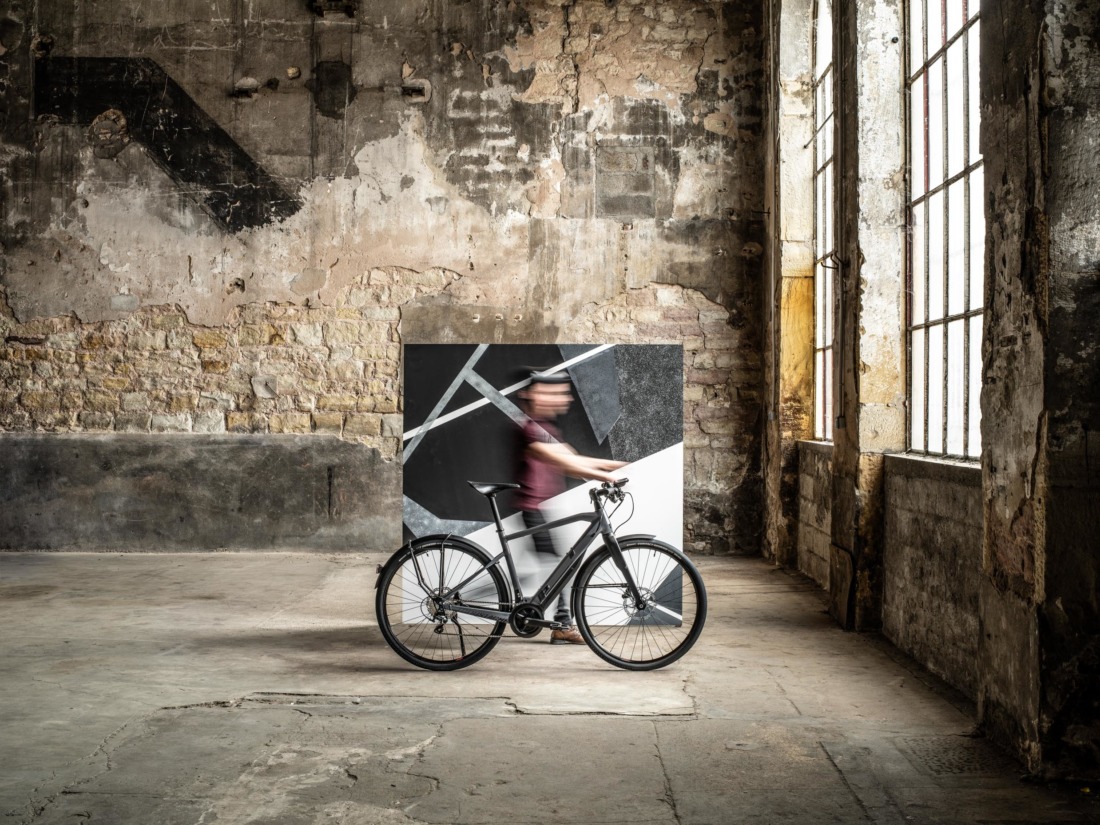 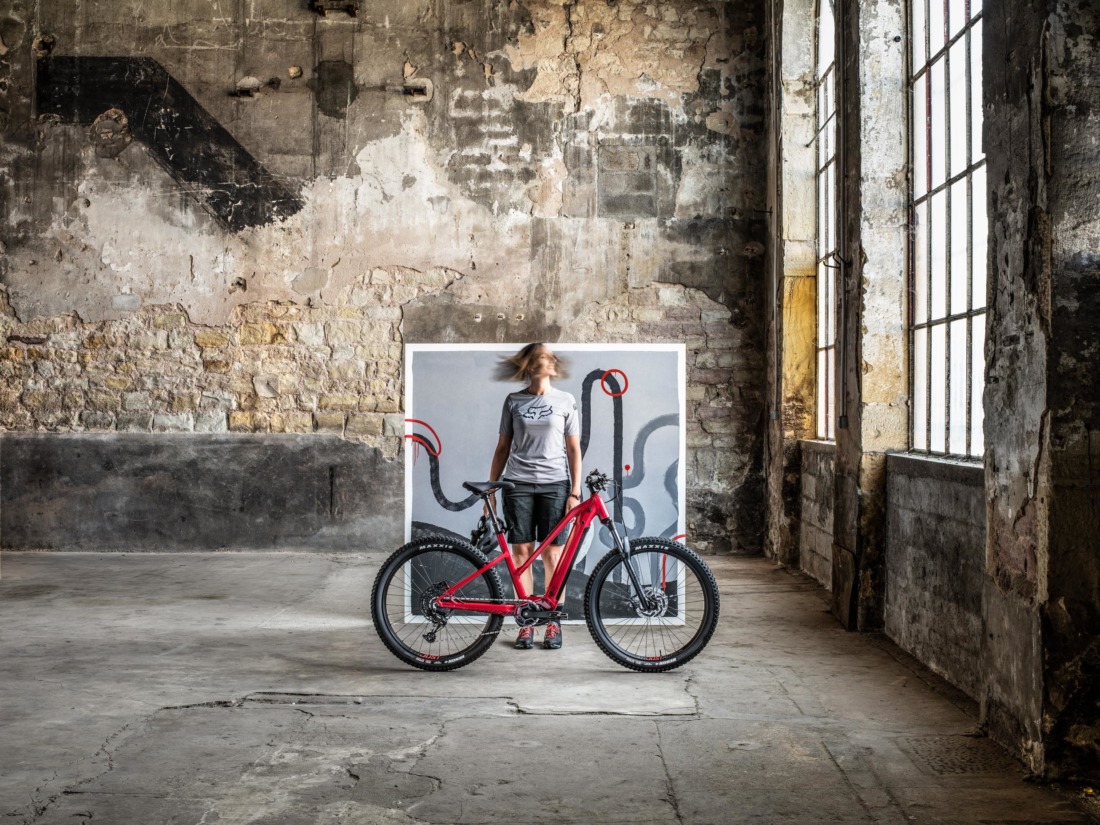 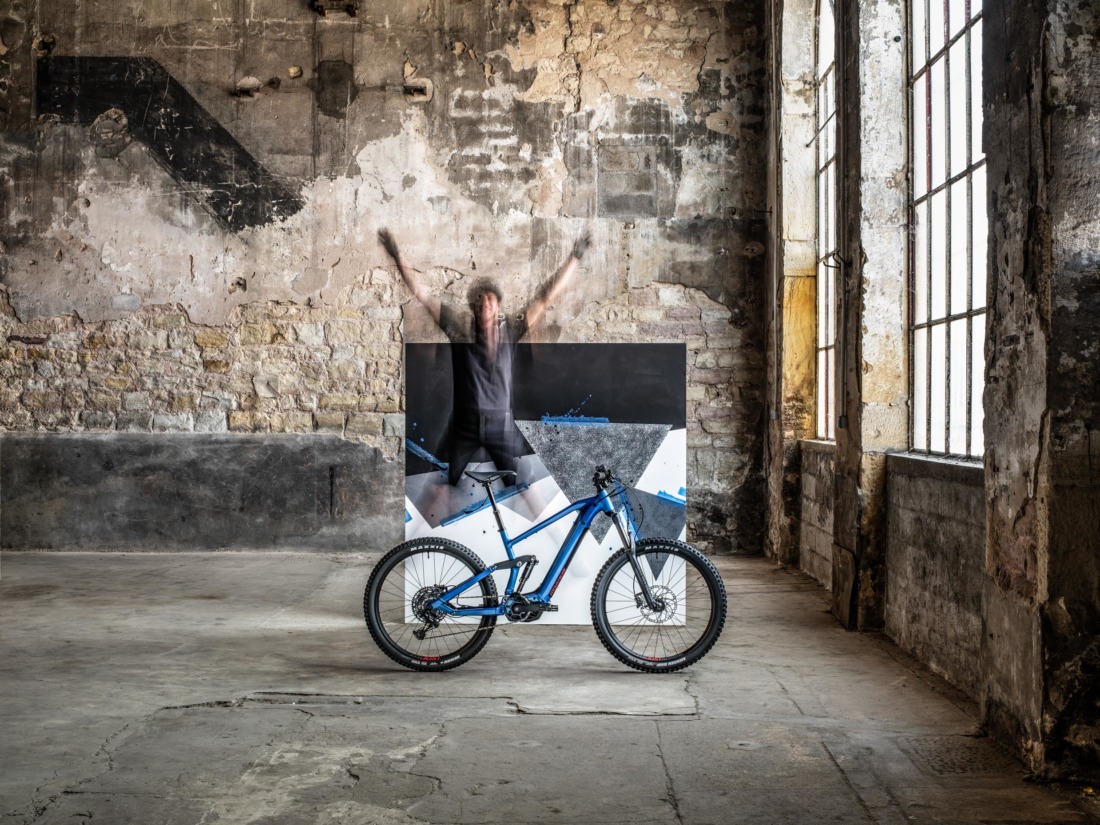 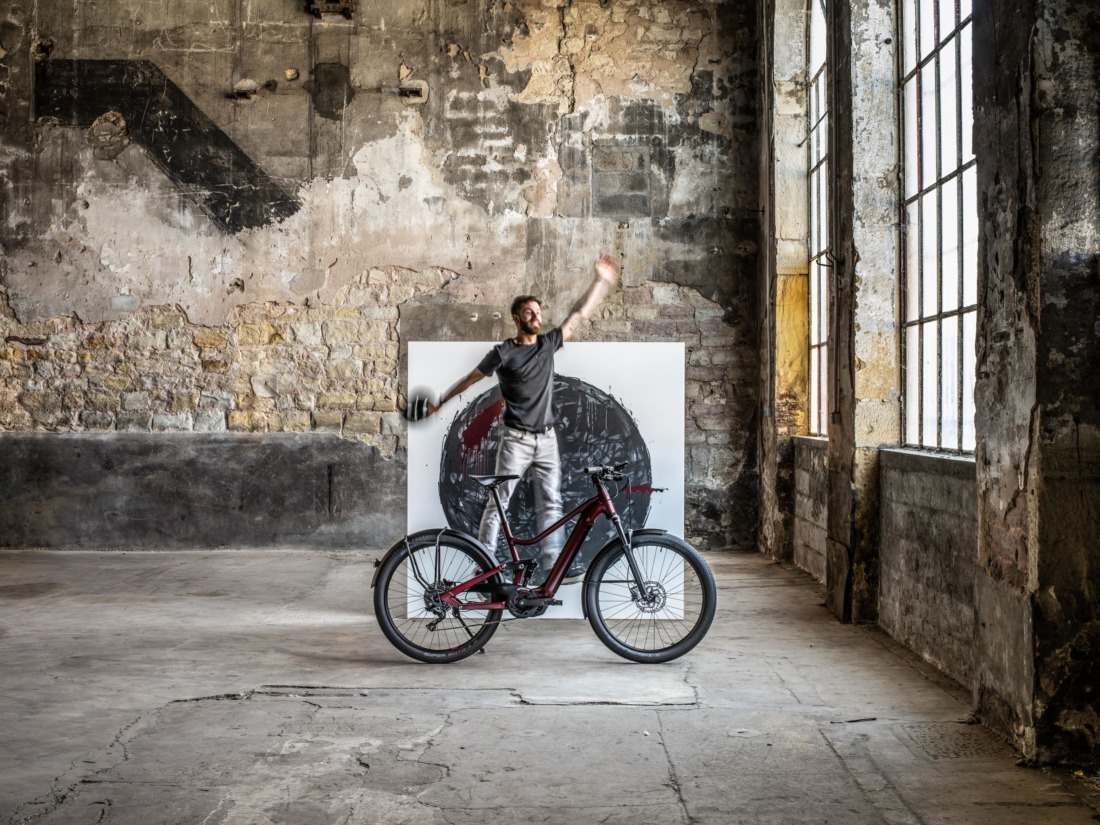 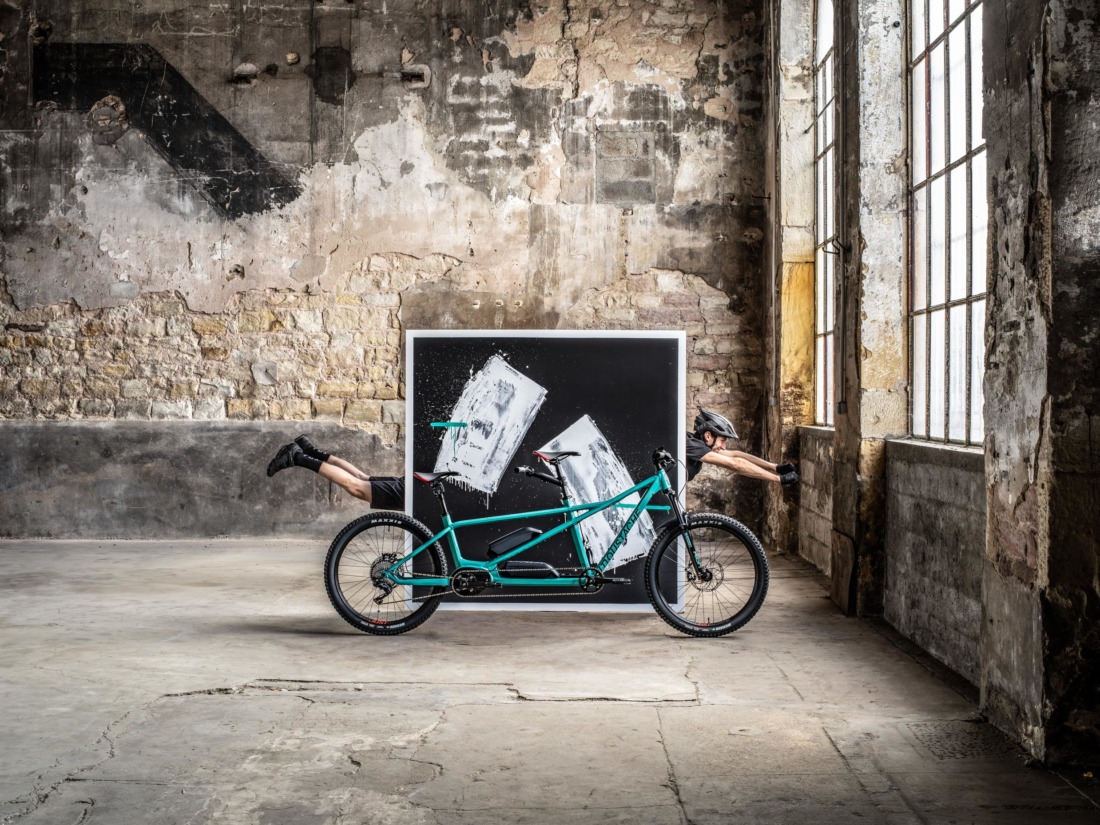 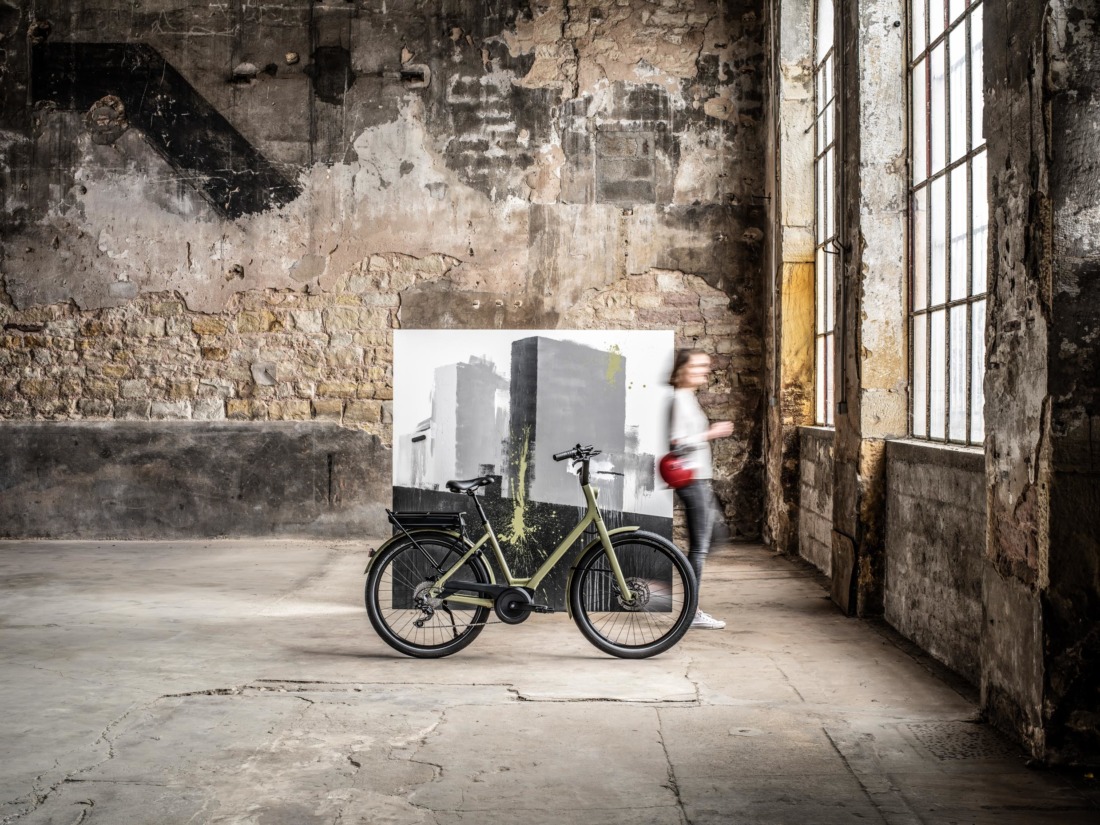 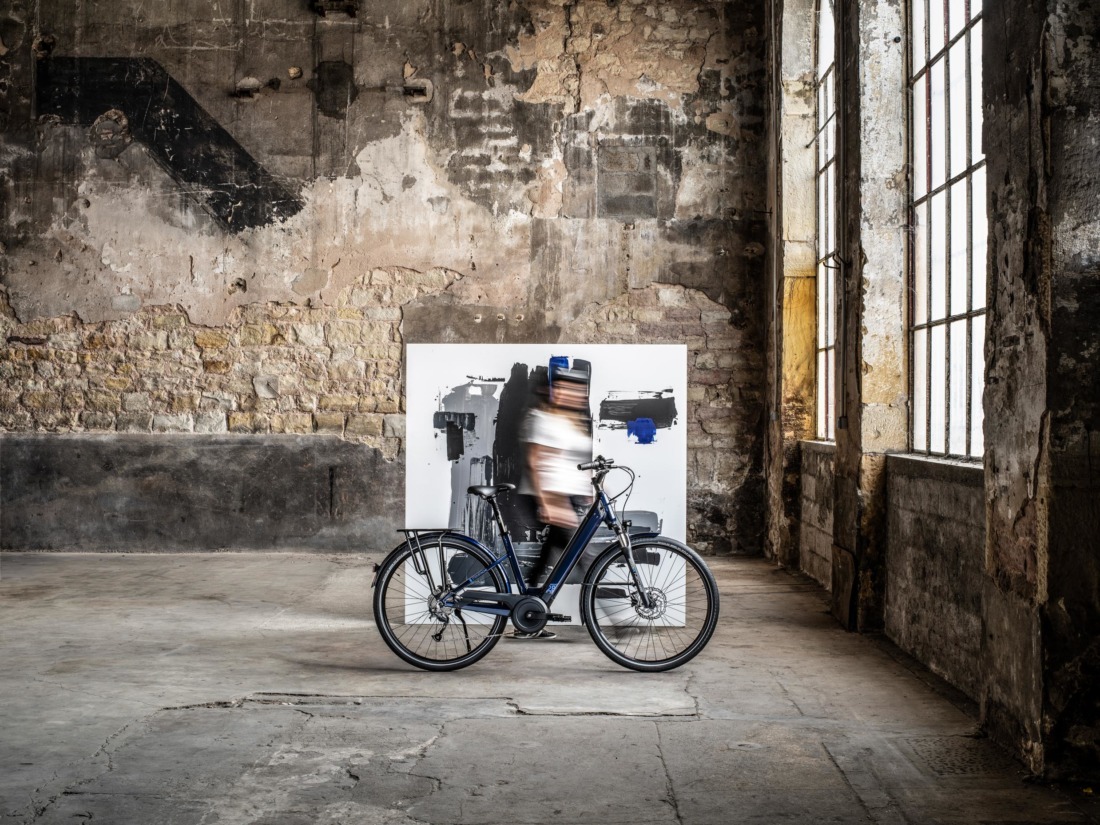 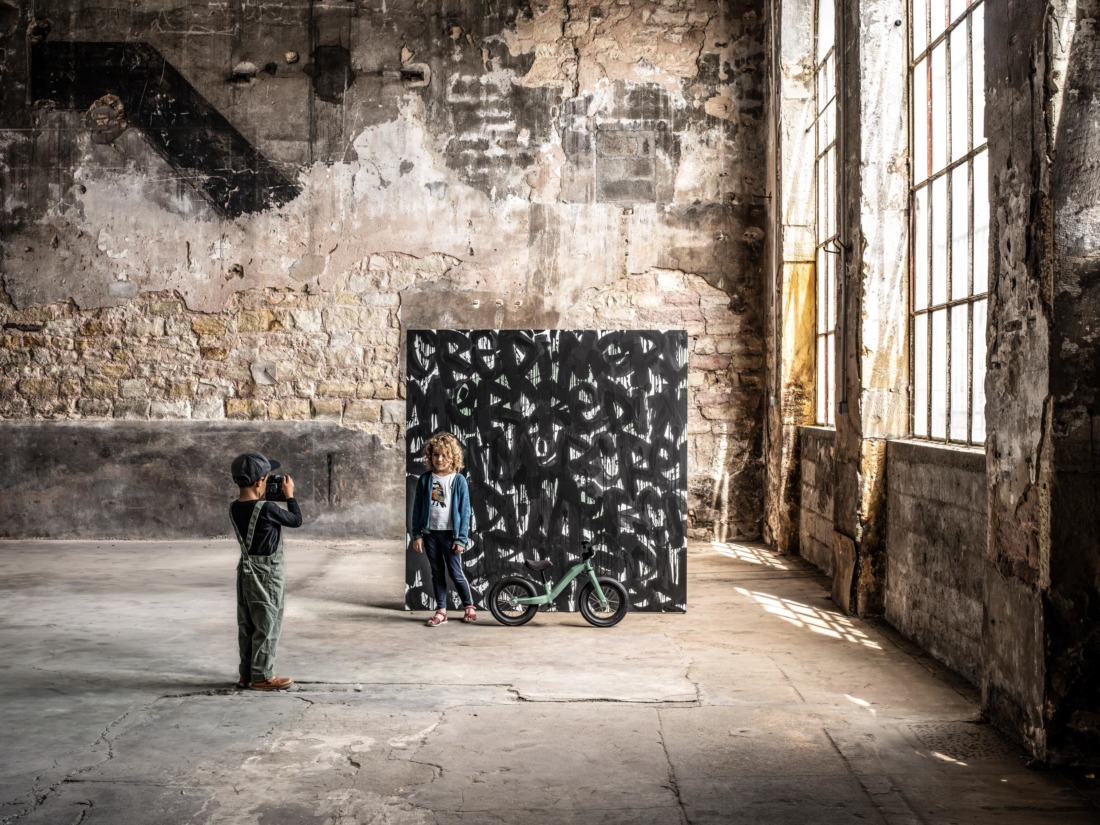 Everyone (or almost everyone) knows, that we come from the Vosges.
For the concept behind the 9th Season, we decided to work with a local artist, who comes from Épinal, and called on Vince (Vincent Loisy). A character that’s outside the frame, that Moustache Bikes chose to realise the paintings that will be used to showcase several models in the 9th Season range.

How did you come to work with Moustache ?

Moustache is very invested in local actions and had sponsored a contemporary art even that our group organised. This gave me the chance to meet Greg Sand (founder of Moustache and also a fan of art) and we got on very well. We said that it would be cool to do something together one day… And here we are!

Can you explain the concept behind this series of canvases?

With Moustache we decided to create 14 artworks, one for each family of bikes, with a different representation for each family. The 14 paintings needed to be different but also complementary. The aim was to present a background that would symbolise as best as possible each bike, a little like an environment that would suit the bike’s world. I worked on the abstract and the figurative side, principally in black and white with shades of grey and a touch of color to resemble the bike.
Each work functions as a whole, with the canvas as a background and the bike in front.
The canvas changes according to the type of bike. For the urban models with elegant lines there is a gentle representation of the town, while for the MTBs and their aggressive lines, we are on something more brutal with rocks…
For this exercise, Moustache trusted in me fully to carry out the work and I had total liberty of expression, which was fantastic. The size of canvas was fairly large (2m x 2m) which made it a little complicated, but very interesting!

Last question: what does Moustache inspire in you?

Freedom!! I’ve been riding a Moustache for a while, already for two years. For me, it’s the ideal form of transport, you are liberated, you do not pollute, you have a free spirit, and there is a real fun side to it! 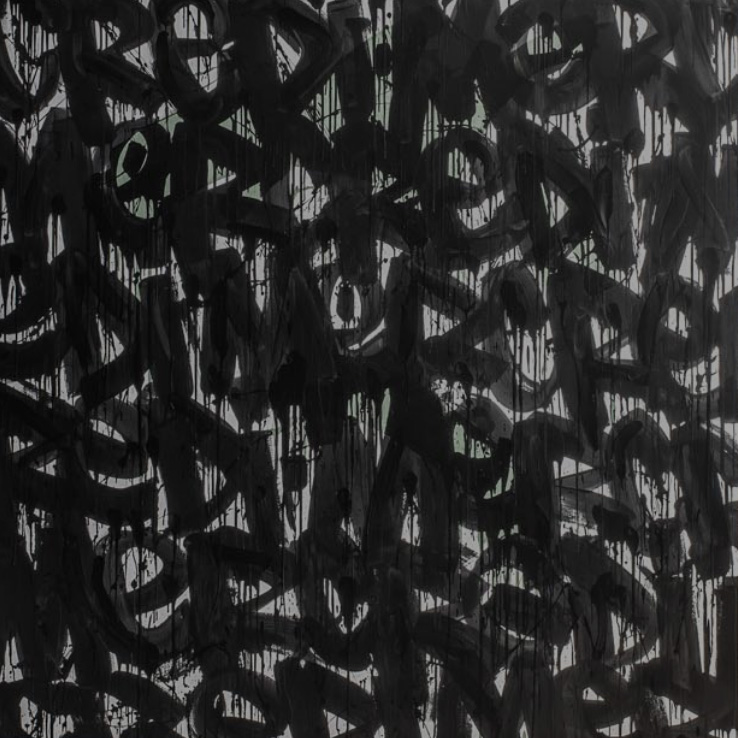 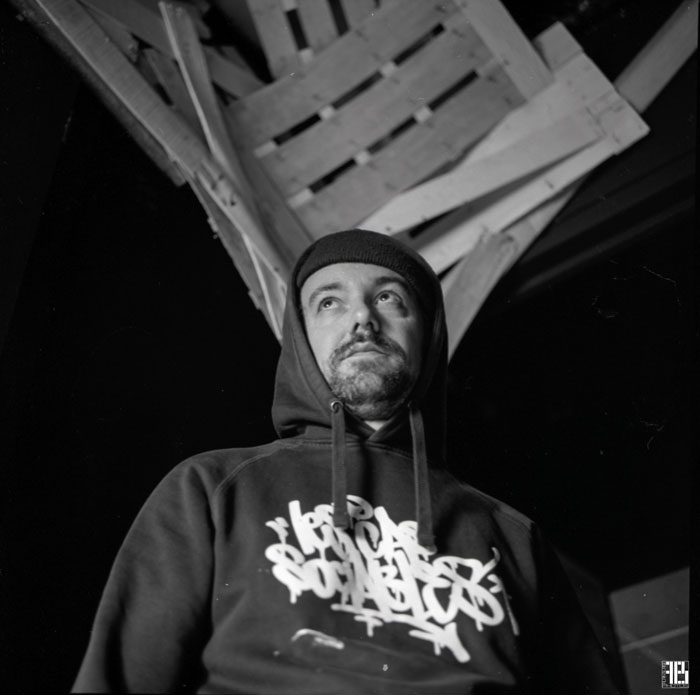 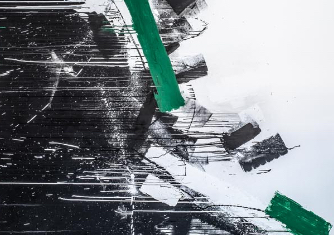 Think outside the frame and discover our new range !
Discover the range

We use cookies to guarantee you the best experience on our site. By continuing to browse the site you are agreeing to the use of our cookies.OkMore info